House On The Edge Of The Park 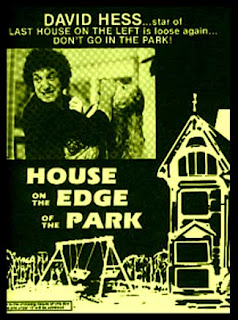 Director: Ruggero Deodato (1980)
Starring: David Hess, Annie Belle, Giovanni Lombardo Ravice
Find it: IMDB, Amazon
Made more than the sum of its parts by a powerhouse performance from David Hess and his incredible permfro, The House On The Edge Of The Park is essentially an Italian remake of Last House On The Left, only nastier and with a more consistent tone. Alex (Hess) is a serial rapist, bored at the weekend. So he calls up his stupid friend Ricky (Radice) and sets out for a night of rape and pillaging. In his sights, a bourgeois house party full of dickheads and ugly people. Whilst it all starts out civil enough, it's not long before Alex and Ricky are terrorising the friends and beating their faces in with tables. Beware, the final paragraph is very spoilery.
House On The Edge Of The Park certainly earns its 'nasty' label. David Hess is at once magnetic and repellent. He pretty much owns the movie and everyone in it. As you'd expect, it's difficult to watch at times and some of the more sexual scenes (which are most of them) are be harrowing and uncomfortable. Which is as it should be. Last House On The Le 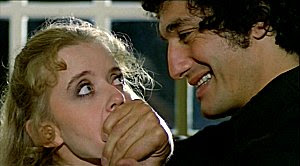 ft, whilst being the more original movie, was tonally awkward and slow. House On The Edge Of The Park is consistently gruesome and cruel. There's no place for comedy cops here.
It's the sort of movie in which people get raped but seem to be sort of compliant. There are a number of sex scenes here, none of them looking or feeling like a 'traditional' rape scene. Take the greenhouse sex scene between Ricky and Gloria (De Selle); it's neither consentual nor rape. She instigates it; he seems more afraid of her; but she's hardly doing it of her own free will. When Alex rapes Lisa (Belle), it's definitely rape, but Deodato doesn't have the actors play it as such.
Hess takes centre stage as lead performer, but Lombardo Ravice deserves equal attention as the more conflicted, childlike of the two. The terrorised victims fare less well, having little to do but... well, look mildly consternated. For the most part, everyone just stands around letting Hess do as he wants. A woman is assaulted as her husband stands around looking only slightly annoyed. To be fair, when they do fight back, Hess hands them their buttocks back on a plate. He even goes potty on one poor chap's head.
Unfortunately, the whole thing is all but ruined by its twist. A gun is produced seemingly out of nowhere (only an hour and a half or so into their ordeal, one character decides to reach for his piece) and then its's revealed that the whole thing was massively planned in advance. By the victims. It's an irresponsible, idiotic and horrible idea. So you planned to let David Hess into your home so's he could rape and assault you and your friends, just so's you had an excuse to shoot him? As plans go, Hannibal Smith you ain't. Still, Hess's demise is suitably horrible.
House On The Edge Of The Park is a better made movie than the likes of I Spit On Your Grave, and even Last House On The Left. It's a powerful, ugly, controversial piece that only barely survives its own twist. If it does one thing though, it's that it thoroughly puts the 'nasty' in video nasty.