Scary Trek 2: Why Star Trek Is Scary: The Original Series 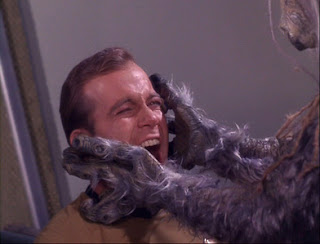 Here at The Horror Review Hole, we like to cater for all audiences (provided those audiences are all me) and keep everyone happy. So when I saw the phrase 'why is Star Trek scary?' pop up in blogger's Search Keywords, what more invitation was needed? Even better, I'm going to resist the urge to say things like 'because of its fans'. Because that would be mean. But I'm a Trekkie, so I'm allowed to say things like that. 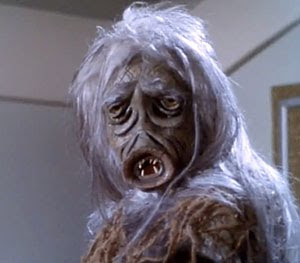 Star Trek takes place, as the name suggests, in space. The final frontier and all of that. Imagine yourself, far away from home. Stuck on a ship that keeps breaking down, constantly at threat from things with silly names like Romulans and Klingons and Ferengi. Double that thought if you happen to wear a red shirt. Triple it if your name's Tasha Yar. Whilst Star Trek is cheesy and naff and socially unacceptable, it's pretty damn scary too. Or it was, when I was ten, anyway.
The Original Series was probably the most disturbing, despite its crap special effects and penchant for melodramatics. Forget The Tribbles and the rubbish Klingons, The Man-Trap features a salt-sucking shapeshifter who seduces Doctor McCoy and tries to suck William Shatner off. Ahem. Even today, the Man Trap monster looks grotesque and a little bit scary. Watching The Man-Trap at such a young age probably explains why I'm so scared of women, and why I hide all my salt before I'll invite a girl round for sexytime.
Also good is The Enemy Within, in which Kirk is seperated into two entities (wimpy and evil or rapey and less rapey, as I like to call them) and is forced to literally fight himself. Wimpy Kirk is incpable of doing anything whilst Evil Kirk runs around in eyeliner, trying to rape everything. No, I'm not going to make a joke here that besmirches the name of Shatner. What is odd, however, is the episode's closing sentiment. Spock states that Evil Kirk, despite being evil and all, had his advantages. Never mind all that attempted rape eh, Spock? Just like a Vulcan.
Wolf In The Fold brings back Jack The Ripper for the 23rd Century. Everyone blames Scotty because, well, he's the only Scottish person on the Enterprise. Jack turns out to 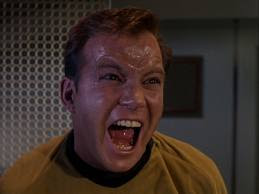 be an entity called Redjac who is defeated when they beam him out into the depths of space. Not all that scary an episode, although it is interesting to see how the 23rd Century spacemen cope with knives over their fancy-pants phaser guns. Blame the Scotsman, that's how they react.
Catspaw is the series' only foray into holiday specials. One Halloween, Kirk, Spock and McCoy beam down to a haunted planet and encounter a coven of witches, sort-of-zombies and a black cat. Kirk finds a skeleton and says "bones?" Geddit? Because that's McCoy's nickname. Arf arf. It's not a very good episode, nor a particularly scary one, but it has its moments.
The best horror moments in Star Trek tend to be incidental ones, organic to the plot. Miri finds a planet populated only by children. The feral children are pretty scary. The way Kirk grooms an underage girl is bloody terrifying. Star Trek is camp and silly and hasn't aged too well, but it chilled idiot me as a child, in the same way as Doctor Who's Daleks did my own father. 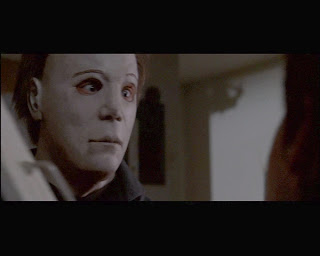 Lest I remind you Bill Shatner is the face of a certain Michael Myers
Even today, The Original Series manages to be a bit scary. No, I'm not talking about the reboot (although Zachary Quinto's Spock is horrifying). IDW comics have produced what is essentially Star Trek vs Zombies and called it Infestation. There are apparently robots and shit too, but the zombies are what I'm really interested in. 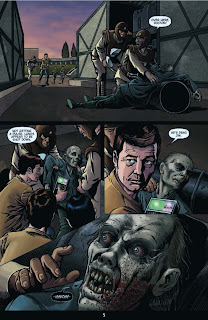 The whole thing more or less leading up to that joke. Still, I think I've been waiting my whole life to read Star Trek vs Zombies. As crossovers go, at least it makes more sense than Star Trek vs The X-Men. Yes, that actually exists. Next up on Scary Trek, Scary Trek: The Next Generation. Yes, there's more. Sorry.