Director: Paddy Breathnach (2007)
Starring: Lindsey Haun, Jack Huston, Max Kasch
Find it: IMDB, Amazon
Because it's St. Patrick's Day next week, I'm half Irish, and also why not, now commences a week of Irish themed updates. Top of the morning to ye, and other utterances.
First up is Shrooms, a movie in which a gang of idiot kids travel to rural Ireland in search of shrooms. Shrooms, to the uninitiated, being hallucination-inducing mushrooms which make a crappy cup of tea but are good if you like talking to inanimate objects and cows. Whilst shrooms are fine in small doses and a controlled environment, no-one seems to twig that noshing on them in the middle of a Gothic looking forest is a bad idea. Also a bad idea, sitting around the campfire telling ghost stories about evil spirits. Unsurprisingly, the kids have a bad trip.
Not the least Tara (Haun), who accidentally eats the wrong type of mushroom and totally ends up with magic powers and puke all over herself. She now experiences premonitions and sees each of her friends dying at the hands of some mysterious force. I guess that's why they call them magic mushrooms. One by one, the kids are killed off. This movie didn't exactly deter me from trying shrooms so much as it did hanging around stupid people.

The fact that everyone is stoned lends itself to some trippy (HA) kill sequences and fun bits of cinematography. The movie's setting is its strongest suit, far better than the boring forests of Friday The 13th and Cabin Fever. If there's one thing us (half) Irish do well, it's gloomy wet forests. And getting drunk. Shrooms goes to the trouble of embracing its Irish roots in that aspect, but completely forgets to include any real Irish characters in the story. For some ridiculous reason, the American characters' tour guide is even an English hippy (Huston). But I digress. There are Irish people in the movie. They look like this: 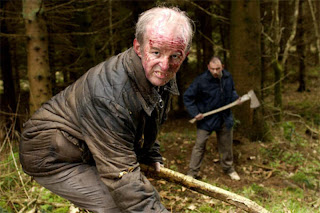 Shrooms won't have the Tourism Board calling anytime soon. Not that I didn't find the Irish hillbilly brothers funny. A sequence involving a telephone is particularly amusing.
Other standout sequences include an imaginitive use of dogging and a scene in which Bluto (Robert Hoffman) talks to a cow. Otherwise, Shrooms is nothing special. The characters are irritating, the acting competent and the story is virtually non-existent. The premonition gimmick gets old fast, and the movie's twist is stupid. For a good movie about kids getting stoned and dead, I'd recommend The Tripper everytime.
But, y'know, Shrooms will do in the absence of that. In the same way that people only scoff shrooms because they don't have anything better to do.