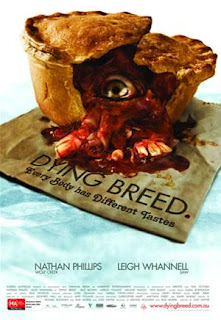 Director: Jody Dwyer (2008)
Starring: Mirrah Foulkes, Leigh Whannell, Nathan Phillips, Melanie Vallejo
Find it online: IMDB, Amazon UK, Amazon US
Anyone who’s been following this site for a while will notice that I have something of a fetish for the backwoods horror (or Urbanoia) subgenre; be it Deliverance, Southern Comfort, Wrong Turn, the execrable Backwoods or Albino Farm, I’ve watched the lot. There’s something about seeing inner-city oiks on the run from axe wielding Hillbillies that gets to me every time 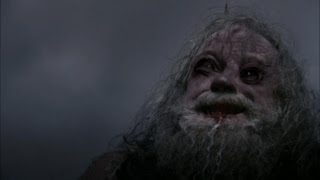 Which isn’t to say that the genre is particularly fresh these days. There’s a credit crunch on, haven’t you heard? Skimming through the newest DVD releases, it seems that everyone’s off to the woods for a cheap holiday. But just as you begin to think you’ve seen every imaginable combination of gas station/bear trap/rape/shlock, something fresh and new comes along, reminding you why you keep watching this shit. Dying Breed is my favourite piece of backwoods horror since the Hills Have eyes remake.

Jody Dwyer's movie has all the familiar, tired tropes, but manages to combine them in a way that’ll have you hooked from start to finish. Bear trap kills are getting a bit stale nowadays, but Dying Breed manages to throw up the gnarliest this side of a Saw film.

Two couples head to the forests of Western Tasmania in search of a probably-extinct species of tiger. What they end up fin 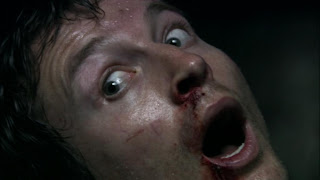 ding is the relatives of ‘The Pieman’ – a cannibalistic serial killer shipped to Australia during the days when it was one big prison. Yes, Pieman. Don’t laugh.

The couples consist of Matt and Nina (Whannell and Foulkes) and Jack and Rebecca (Phillips and Vallejo). Mirrah Foulkes gives a great performance as leading lady Nina (although I’m a sucker for an Irish accent) and Vallejo is fine too, but the blokes don’t hold up quite as well. Leigh Whannell is better than he was in Saw, but is a bit nondescript here. It’s an unremarkable, forgettable performance, enlivened only by a bit of melodramatic gurning during the movie’s final quarter. But everyone else pales in comparison to Nathan Phillips’ Jack. He channels his inner Jack Black to create the most annoying character since anything, ever. It’s bearable, but only just. And definitely worth suffering through for the later payout. 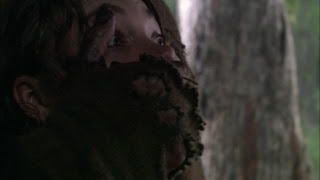 And what a payout. Dying Breed will probably be compared to Wolf Creek, simply because it’s of Antipodean descent (and because Phillips is in it), but it’s much more similar to Wrong Turn or The Hills Have Eyes and far nastier than Wolf Creek or either of those movies mentioned there. Axe kills, crossbows and bear traps reign supreme in the second half, all done with startling gusto. There’s a particularly horrible tooth-removal scene that’ll make you never want to visit a dentist again. Animal lovers should probably avoid Dying Breed too.
The later chase scenes are amongst the best I've seen in a horror movie, thanks to Dying Breed's wonderful enviroment (which recalls the swampy murk of the quite similar Southern Comfort) and the nasty yet believable pursuers. There's some neat little twists scattered throughout, and the movie ends on a delightfully cruel note that ensures Dying Breed will stay with you for longer than your average bit of backwoods crud.
It also has the greatest one-sheet poster I've ever seen, which instantly makes the whole thing worthwhile.
4/5 screaming Scream Queens!!!