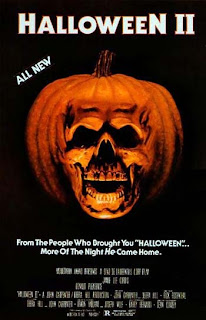 Director: Rick Rosenthal (1981)
Starring: Jamie Lee Curtis, Donald Pleasence
Find it online: IMDB, Amazon UK, Amazon US
The original Halloween sequel to not suck and be set in a hospital, Rick Rosenthal's Halloween II always faced something of an uphill struggle. How does one follow up what is widely regarded as one of the greatest slasher movies of all time? Well, the man himself didn’t really bother, leaving the relatively inexperienced Rick Rosenthal to carry on in his wake (although he did help on writing duties).

Like most sequels, Halloween II delivers up a hefty helping of more of the same, albeit with more gore and a higher bodycount. We return to the action mere moments after the first film ends. Laurie is off to hospital. Doc Loomis is still hunting for Michael Myers after shooting him six times and dropping him off a balcony. Dude’s the original 50 Cent (ah, but if only Curtis J was as silent as Michael). Michael gives him the slip and heads off to the hospital where he hopes to get all stabby with the already traumatised Laurie. Good luck with that, Mike. It’d take him a further twenty-odd years to finally get around to killing Laurie. So he might fail to kill Laurie, but he manages to off plenty of unsuspecting hospital staffers over the course of the movie.

So all the original surviving players are back. Jamie Lee Curtis is a bit too jumpy and traumatised this time around, robbing Michael somewhat of what could’ve been a great showdown. As before, Donald Pleasence’s Doc Loomis is the best of the bunch, obviously having a good time with the role and really selling himself as a badass psychiatrist completely obsessed with hunting down his most dangerous patient.

One thing that Halloween II does bring is the big revelation that Laurie and Michael are related. It’s a nice little twist, and really adds to the characters’ dynamic in a powerful way. There are very few franchises that manage to make two characters just fit in the way Halloween does; watch Resurrection or some of the lesser sequels to see just how pointless it all feels. Michael hunts down Laurie because, without her, he has nothing better to do.

Of course, Halloween II isn’t in the same league as its predecessor, but it never really could be. Michael’s given too much screentime, and the whole thing just seems a bit pointless and redundant – a rehash of earlier goings on, only set in a hospital. But it isn’t nearly as bad as many of the other imitators out there, either – or even its own subsequent sequels and remakes.
4/5 screaming Scream Queens!!!