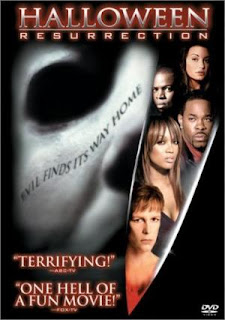 Director: Rick Rosenthal (2002)
Starring: Kung fu Busta Rhymes, Jamie Lee Curtis
Find it online: IMDB, Amazon UK, Amazon US
Halloween: Resurrection AKA The one with Busta Rhymes starts, for some reason, with the death of the best thing (Myers aside) in it. Yep, Michael finally gets around to killing sister Laurie. Fella took his sweet time. There’s no mention of whether he managed to kill nephew Josh Hartnett. One would hope so.

Whereas H20 managed to revitalise the flagging series, Resurrection makes you wish they hadn’t started with this whole sorry sequel business at all. It also pretty much killed off the franchise for a good five years, leaving an opening for Rob Zombie to refuck it again in 2007. Resurrection is the Batman & Robin of slasher movies, but without any Nolans ro repair it afterwards. The movie opens with Laurie Strode incarcerated in a mental home, hiding there from Michael and growing her hair to unflattering lengths. With a terrible bit of retcon, it’s revealed that Michael managed to survive the events of H20. The unfolding of events in the hospital aren’t too bad, but everything else is. 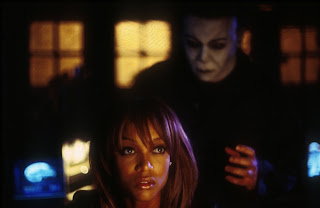 When Resurrection came out, it was a time when the reality TV thing was just starting to kick off, with movies such as this and My Little Eye. Sadly, due to a general lack of quality, it didn’t really catch on. Resurrection is set in the Myers household, where an Internet reality TV show is filming there. It’s not an inherently bad idea, but the execution therein truly is. The action is boring and predictable, the tension lacklustre and the acting is awful. Busta Rhymes essentially plays himself, whilst everyone else is flat and unmemorable. Leading lady Bianca Kajlich doesn’t even have a profile picture on IMDB, and has done largely nothing before or since Resurrection. An ironic title, since it pretty much killed everyone’s careers (and the franchise) dead.

As you don’t need me to tell you, Michael turns up and kills everyone. He lops off some poor woman’s head, cuts a few throats and stabs one or two people, but it all feels pointless without Dr. Loomis or Laurie to root it down in Halloween history. But at least Busta Rhymes turns up and performs the now infamous kung-fu bit. Who needs good actors and likeable characters when you got kung-fu Busta fucking Rhymes?

By far the worst-received of the Halloween movies (at least until Rob Zombie turned up), Resurrection is a terrible way for the icon to bow out.
1/5 screaming Scream Queens!!!