Halloween 3: Season of the Witch 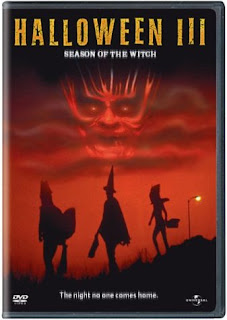 Director: Tommy Lee Wallace (1982)
Starring: Tom Atkins, Stacey Nelkin, Dan O' Herlihy
Find it online: IMDB, Amazon UK, Amazon US
No Michael Myers in this one, but plenty of Tom Atkins, which is a pretty fair trade-off. Maybe the upcoming Halloween 3D (Hallow3Dn? Betcha) will try and adapt Season of the Witch with an aged Atkins in the lead. Hm, perhaps not.

If Season of the Witch had been a better movie than it turned out to be, then maybe fans wouldn’t have been so offended at the lack of Michael in this movie. But, it’s shoddy stuff all around, so people were offended, and thoroughly hated the movie.

Having said that, it’s nowhere near as bad as Resurrection or 2007’s Zombieween. The plot, admittedly, does sound like it should have Robin Williams involved somewhere. An evil mask-making company is building nasty kids’ latex masks which kill the wearer by melting their faces whenever a certain TV advert shows (a positively epileptic image of a flashing pumpkin). It’s up to Doctor Dan Challis (Atkins) to save America’s kids from the evil Silver Shamrock company. Because nothing says Halloween like a shamrock.

Tom Atkins is awesome, which you already knew, whilst the story, shocks and overall style is in keeping with Carpenter’s aesthetic. It’s a lesser sequel, to be sure, and probably doesn’t deserve to be a Halloween title, but is definitely worth a watch sometime. Ultimately, your enjoyment of this movie will depend on your stomach for cheesy, naff 80s' horror. It's not as if it did any lasting damage, anyway - the Shape was back a few years later in his Return, which ended up being one of the better sequels.
And Season's tagline -the night no-one comes home - makes me smile every time.
2/5 screaming Scream Queens!!!