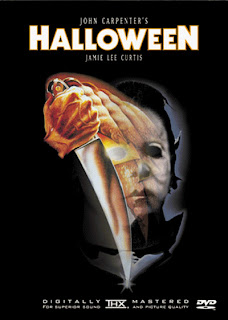 Director: John Carpenter (1978)
Starring: Jamie Lee Curtis, Donald Pleasence, PJ Soles, Nancy Loomis
Find it online: IMDB, Amazon UK, Amazon US
Haddonfield, Illinois. Young Michael Myers murders his family with a knife that’s as sizeable as it is sharp. Deciding that he’s evil, the doctors lock the kid up in a mental institution for the rest of his days. Or at least, they try to. All growed up, Michael Myers affects himself an escape and returns back to Haddonfield. Doctor Blofeld (Donald Pleasence) sets out hunting down his evil ex-patient, all the while telling everyone he meets just how evil Michael is. Back at Myers’ childhood home, nubile babysitter Laurie Strode (Jamie Lee Curtis) is looking after wee tot Tommy Doyle (who’d grow up to be friend-of-a-Friend Paul Rudd in H6). But as she’s soon to find out, Michael is pretty intent on murderising her.

Obviously, you knew that already. You don’t have to be a horror fan to like John Carpenter’s Halloween, which is the beauty of it. It’s more than your average sleazy, stupid slasher movie. It’s an exercise in tension, so well executed that it transcended its boundaries to become widely and rightfully acknowledged as one of the greatest horror movies ever made.

Inspired by Alfred Hitchcock’s masterful Psycho and a few lesser slasher movies (such as the mightily underrated Black Christmas), Carpenter delivers what many would call the perfect slasher movie – one which has been often imitated but rarely bettered. Everything from the iconic theme tune down to his framing and use of the Shape’s POV is brilliantly done. Like the similarly influential Texas Chainsaw Massacre, the gore is sparse. The violence comes in bursts. But you know all this already, don’t you??

The casting is perfect. A young Jamie Lee Curtis appeals as babysitter Laurie, and PJ Soles brings her boobies to the proceedings. whilst Blofeld himself is a great foil for Michael. For a bit of synchromisticist fun*, note this: Donald Pleasence’s Blofeld directly inspired the Austin Powers movies’ Dr. Evil… played in turn by one Mike Myers. In this movie, Loomis faces off against Michael Myers. Coincidence? Yes. Look, shut up. I’m just trying to be semi-original here. D'you know how many people have reviewed Halloween over the years??

If there is a fault with Halloween (and horror-reviewing conventions requires me to say that there isn't) then it’s down to the many imitations that've come out since. Being one of the original slasher templates, the movie might feel slow and predictable to first-time viewers. You won’t have a hard time guessing what’s coming next, due to the fact that so many other works have done it so many times since. But such is the case with so many other significant works – such is the peril of being so influential. Still, Halloween stands up extremely well for a film of its age. Michael Myers is still an effective bogeyman – Carpenter largely hides him in the shadows and uses him wisely – and the tension is still expertly cranked. Anyone who ignores this seminal piece of work simply because of its age doesn’t deserve to be calling themselves a horror fan anyway.

* The word ‘fun’ is used here in a highly subjective context, and may not actually be fun.