My Bloody Valentine... a 3D special.

This is not a review of the movie itself. Moreover, this is a review of how it performs on DVD. The short answer: not very well.

My Bloody Valentine was the first 3D movie I ever saw. At the time, I ga 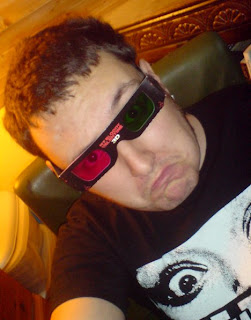 ve it 3 screaming Scream Queens, which I think is still a pretty fair assessment. If you need a recap, go click on the link.

The DVD comes with two pairs of 3D glasses (modelled by yours truly). Not the snazzy plastic ones you’d get in the cinema, but rather the cardboard red-and-green types you’d find in old comic books and newspaper freebies. They Come emblazoned with ‘My Bloody Valentine 3D’ and have advertisements for Saw VI on the sides. Way to promote, Lionsgate. Being as there are two pairs, it’s a nice reminder to go see Saw VI every time you look at your pal’s head from an angle. There’s also some safety instructions printed on the inside of the glasses. Firstly, you shouldn’t eat your glasses, since they’re a choking hazard. Nice to know. Secondly, you shouldn’t wear them for extended periods of time, nor for physical activity or outside play. Which is a shame, since I’d love to wear these down the pub. And finally, they’re not to be worn as actual sunglasses. All in all, they’re pretty fucking useless. They’re also useless as 3D glasses, since I tried to wear them at the cinema to see Coraline, where they didn’t really work either.

Onto the DVD itself, which is double-sided, and includes the 2D version as a special feature. Personally, I'd have been pissed off if they hadn't included it in 2D, since I don't fancy looking (even more) like an arse every time I want to watch the DVD. Being double-sided, its also easily damaged. But at least Lionsgate saved themselves some money. Money which they obviously didn't spend on the glasses. So you have 2 versions of the film. However, run on Windows Media Player, neither actually works. There’s a massive red line along the bottom of the screen (which occasionally turns into a massive red-and-green line if you pause it). It’s not a 3D line, in case you were wonderin 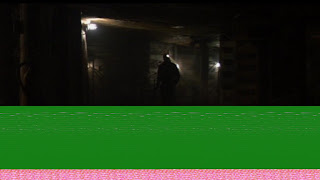 Watching the 3D version at home is an interesting experience. By which I mean a terrible one. The gimmick is largely redundant; the glasses are uncomfortable, and looking like a moron is much less fun when home alone. You could watch it with a friend, but cardboard 3D glasses aren’t really everyone’s idea of fun, are they. Unless you’re under 10 years old, I suppose.

But anyway, the movie looks like shit. The glasses don’t work particularly well, and the image is gloomy and ugly, overlaid with occasional shades of red and green. The 3D gags only work if you’re watching the TV from a correct angle, and even then it looks blurry. Perhaps it’s better done on a HD format such as Blu-Ray, but My Bloody Valentine simply isn’t entertaining enough to warrant shelling out that much for (and the DVD alone costs £20). 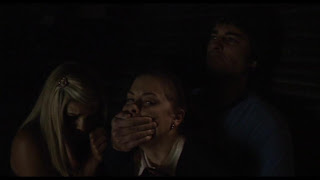 The 2D version is equally troubled. Shorn of its gimmick, the movie itself still works (Jensen Ackles is still a shitty actor in two dimensions, and Jaime King is just as adorable) but every frame screams that this was built for 3D - and bigscreen 3D at that. It’s particularly noticeable in the title sequence, which now just looks like a load of newspaper headlines and crappy fonts thrown together for the sake of it. Likewise, all the entertaining kills seem fake and tiresomely in-your-face. The nudity scene is still nice, though. Lesson learnt - boobies look lovely, no matter how many dimensions you view them in.