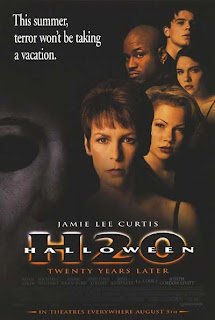 Director: Steve Miner (1998)
Starring: Jamie Lee Curtis, Josh Hartnett
Find it online: IMDB, Amazon UK, Amazon US
No, not Halloween Underwater, although that would be pretty cool. H20 ignores all of the suckier sequels, and is considered a direct sequel to Halloween 2. Everyone’s favourite hermaphrodite is back. Jamie Lee Curtis stars as Laurie Strode, and this time she’s got a son, played by Josh Hartnett. But it’s okay, because he’s not annoying in this movie.

We find Laurie working as a headmistress at an exclusive boarding school in Northern California. She’s faked her own death, is living under an assumed name and has her son and a boyfriend. It’s been twenty years since that fateful Halloween, but still she’s traumatised, a sweary alcoholic and living in fear. So much so that her son thinks of her as a nag, and is determined to sneak out after hours for a cheeky little Halloween party of his own… 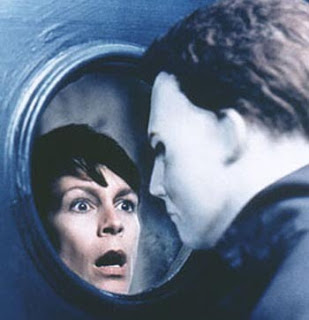 But Laurie was right to be a nag. Michael decides to mark their anniversary by turning up at the college and murdering people; top of the list, his sister and his nephew. How cute.

One of the better the sequels, H20 wisely ignores all of the stupid continuity issues that gathered up over the course of Halloween 4-6 and gets on with telling a good old-fashioned slasher story, largely inspired in tone and look by the Scream movies (with Kevin Williamson working on the script too). It’s fun and respectful and pretty faithful to John Carpenter’s original vision. In stark contrast to some of the worse episodes, the violence is more slight, the gore less prominent. Bringing back Jamie Lee Curtis also adds a bit of authenticity and is a nice touch, making it feel a more legitimate sequel than most.

It’s not a perfect movie by any means. Due to years of overexposure, Michael’s no longer the imposing figure he once was. There’s no point hiding him in shadows anymore, since we all know what he looks like. And longtime horror fans might be a bit bored by the slight plot and run-of-the-mill slasher stereotypes.

So if you ignore the lesser sequels, Resurrection and Rob Zombie’s remakes, H20 stands as a nice little bookend to Halloween 1-2. The final showdown between brother and sister is certainly the most memorable, and the most definitively final of them all.

But of course, they had to go and fuck up all that goodwill with Halloween: Resurrection, didn’t they? Who would have thunk that following this, the franchise’s darkest days were harkening…
3/5 screaming Scream Queens!!!