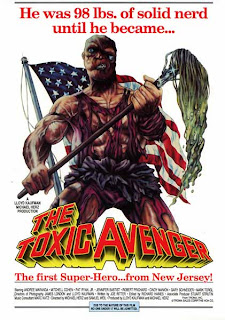 Melvin Ferd is your average movie nerd. Think a really, really creepy version of pre-radioactive Peter Parker. He works at a health club in Tromaville, New Jersey, where he is relentlessly bullied by the more muscular, attractive kids. After a prank goes wrong, Melvin ends up taking a swim in a bath of toxic waste. Thankfully this is comic-book variety toxic waste, and Melvin is soon enough transformed into a hulking great superhero; the eponymous Toxic Avenger.
Subtlelty not being one of director Lloyd Kaufman's strongest points, The Toxic Avenger is packed to the brim with bad taste humour, outrageous gore and a bombastic bombload of nudity. Viewers will either love or loathe this brand of humour - thankfully I'm an immature idiot, so I loved it. 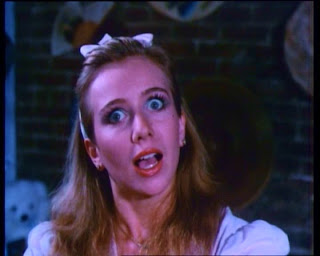 Political correctness, thy name is Lloyd Kaufman
Once transformed into Toxie, Melvin sets about seeking revenge on those who caused his toxic-waste dip. Somehow he ends up being embraced by Tromaville as a superhero; and finds love in the shape of Sara, a blind girl he rescues from rape (Thug: "Knock knock. Sara: Who's there? Thug: Ben. Sara: Ben who? Thug: Ben dover!!" - Thug initiates rape). Such jokes aside (y'know, I think I saw those lines of dialogue on a porno once) poor Sara forms the butt of about 80% of the jokes - most of which either involve her cooking with oven cleaner, or stabbing Toxie in the love-spuds with her cane.
The violence is equally over-the-top. Highlights include a bunch of intestines being unwound from the owner's body, an old lady being shoved into a washing machine, and a lot of limbs being torn off. And, for the trifectra, there's more female nudity than you can shake a lovelength at, which is always nice.

Unfortunately, my copy of the film (the Region 2 version) seemed to have much of the gory goodness cut out, resulting in a somewhat fragmented affair. Some of the kill scenes are quite confusing, since it'll skip from (a) Toxie entering a room to (c) victim dead. It's really worth the extra effort that finding an uncut copy entails, since The Toxic Avenger needs to be seen in its full glory to be fully appreciated. 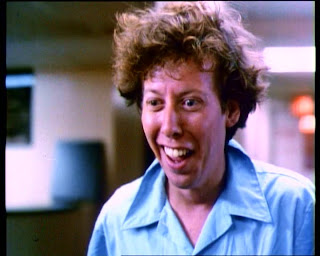 Even if you're not usually a fan of Troma productions, The Toxic Avenger really is worth seeking out. Conversationally, the novelisation is a pretty good read too.... even better than the film it's based on, in fact.