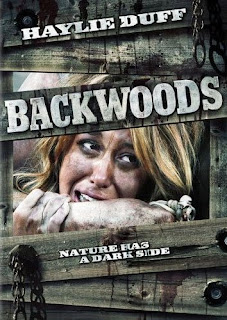 And so a gang of annoying male fucks (played by no-one you’ve ever heard of) and annoying female fucks (Hilary Duff’s unfamous sister and a pretty blonde who’s even less famous than that) head out to hick county for a game of paintball and to engage in pre-marital intercourse.

Not even ten minutes in, and the clichés are stacking up. There’s the pre-credit kill/rape sequence (which seems awfully similiar to the beginning of the ‘new’ Hills Have Eyes 2), nicely followed by a scene in which our heroes stop off at a roadside gas station (Texas Chainsaw Massacre, Deliverance, Wrong Turn, the Hills Have Eyes, Manhunt, Every Other Backwoods Horror Movie in Existence) whilst the to-be Final Girl reads conveniently placed 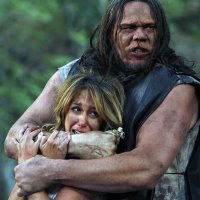 After some cursory waterhole swimming scenes (all the Friday the 13th movies) and an idiotic attempt at foreshadowing (“y’know this used to be a military installation?”) the idiots set up camp and prepare to die. And of course, this is all accompanied by an enormous amount of POV shots from the bushes. Spoo-ooky.

After the shitheads take too long to realise that they’re not alone - “oh look, a hunting net and the hanging corpse of an animal” - and ignore the fact anyway - “Never mind, let’s go shoot us some shit” – there’s a pointless paintball battle and the discovery of an old house in the middle of the woods. Bollocks, did I get my DVDs mixed up and put Wrong Turn on by accident??

Anywiddle, half the team ends up captured and the other half stands around the campsite looking gormless. It’s at this point – as Duff listens to her friends whimpering and crying for help over walkie-talkie – that comes the closest to actual ‘acting’ in Backwoods. Fair enough, it’s tempered with an expression of constipation, but she does look sort of half-worried. But I digress:

The fuckwits finally realise that they’re on the menu tonight. While the blonde girl engages in a little backwoods bondage, the others run around the forest haplessly trying to fight arrows with paintballs. After meeting up with a poor-mans’ Sheriff Hoyt, Haylie manages to get herself captured too. For what is probably some very good reason, Haylie is changed into a purty white dress. Mistaken for the FBI, our pet idiots are then tortured and subjected to interminable religious lectures (hello Timber Falls!) 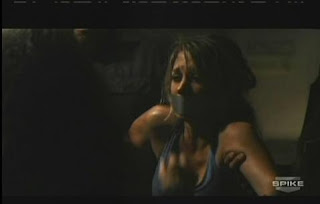 age, blah blah, rape. As you’d probably expect, the ‘in captivity’ segment takes up most of the running time. Although I suppose having the ‘characters’ spend so much time in captivity saves the scriptwriters from having to write too much ‘story’. Unfortunately, Backwoods does it worse than most, accompanying most of its bondage bullshit with religious babble and pathetic ‘motive’, most of it seemingly left over from the comparatively good Timber Falls.

Even fans of the backwoods horror sub-genre will be bored by Backwoods. Whereas the charm of such movies usually lies within seeing familiar elements combine to make something ‘new’ (well, um, if done well – like Wrong Turn 2, Severance or the other Backwoods, the movies can occasionally rise above the sum of their parts). This particular Backwoods is an example of everything that can be wrong with the subgenre. Like Manhunt or the execrable Hills Have Eyes 2 (either version) this takes all the familiar elements and simply lays them out, one after the other. There’s no twists or turns, it’s humourlessly done, and the directorial style is flat, at best. Backwoods is hard to recommend, even to aficionados of the subgenre. This is a movie so exceedingly shitty that it bypassed DVD and went straight to TV.
What starts off as being harmlessly familiar becomes something far worse; offensively bland, boring and stupid. In fact, Backwoods loses the only Scream Queen it had going, simply due to that last hour or so of religious cultist bullshit. I’m neither religious nor a hillbilly; but I wish I was, just so as I had more reasons to hate this film more than I already do.

If you must watch a movie called Backwoods, go see the good version starring Gary Oldman and Paddy Considine instead.