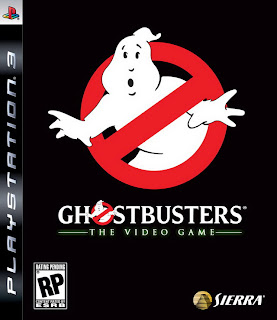 Thanks to the joy of computer games, we are spared fat, old Ghostbusters and instead get them in their prime. You are the newest recruit, fighting alongside Egon, Venkman, Ray and Winston. You’ll battle ghostly figures new (annoying great golems) and old (Stay-Puft! The Librarian!) You’ll also get to catch up with the likes of Janine and Walter Peck. It’s like Ghostbusters III… only not. And no, you can’t drive Ecto-1.

Set two years after the much-maligned events of Ghostbusters II, we find the Ghostbusters recruiting for a technician to try out their newest, most dangerous equipment. You play that technician. Since you don’t have any lines (or even really interact with anything besides ghosts) it’s up to you to simply follow the chaps around like a third-wheel, getting excited every time Ray congratulates you on a job well done.

The ‘plot’ is computer-game standard. A maguffin is on the loose, freeing a bunch of ghosts from your containment unit, whilst also opening doorways to new dimensions. All this seems to be somehow linked to Venkman’s newest squeeze (not Dana Barrett, and played by Alyssa Milano) and the Ghostbusters have to figure out what’s going on and how to stop it. It's thin, but then, nobody cares about the plot, do they?

There are two main elements to enjoying Ghostbusters: The Game. The first is strapping on a great big proton pack and getting to unleash some serious wish fulfilment on the world. The second is getting the gang back 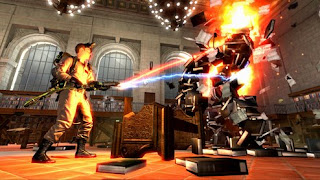 together. All the original Ghostbusters are back – from the notoriously reticent Bill Murray right down to the underused Ernie Hudson.

The best thing about the game is that it completely feels like a Ghostbusters film. It’s equal parts funny, scary and thrilling. And it’s so in-keeping with the movies’ spirit (aha, spirit… GET IT…. no pun intended though) that poor old Winston doesn’t make an appearance until well after the first act.

Playing with the ‘Busters equipment never gets old. Despite several new weapons you get later on, the proton pack remains the most fun to use. It works exactly as it does in the movies – first you’ll want to weaken the ghosties by blasting at them with your proton steams, before wrangling them in a ‘capture’ stream. As the ghouls try to break loose, you’ll be forced to bash them against walls and floors and suchlike – completely destroying the brilliantly destructible environments in the process. Other weapons include a slime gun and variants on shotgun and rocket launcher (all of which your pack niftily transforms into). The weapons are useful and generally fun to experiment with. Although fuck, why wouldn't they let me drive Ecto-1????

Unfortunately, it’s not all as perfect as one might hope. The voice acting ranges from brilliant (Ackroyd, Hudson) to bored (Murray). Harold Ramis’s Egon is great but underused, too often reduced to barking orders and instructions (he even comments on this fact in a behind-the-scenes video). AI is also disappointingly off. In battle, your fellow Ghostbusters tend to be completely useless, and you’ll spend great heaps of time reviving them from their injuries. It’s also a little disheartening to see your childhood heroes flailing about on their backs, calling for help every few minutes (Murray’s cries of “little help, yo, little help?” inparticular, gets annoying fast).

It’s also a bit too linear. There’s generally only one route through all the levels, and when there is a wee deviation, it inevitably leads only to a collectible item of some sort. The story, as mentioned earlier, could have used a little work. The game tends to spend too much time revisiting past glories (the hotel, the library, the museum… the hotel again) where a little inventiveness might have been welcomed. So, as such, it’s the levels set in the Ghost World and Lost City that work best. All too often there’s a feeling that you’re just plodding through levels just to get to the next cut-scene.

Ghostbusters: the Game, then, is something of a mixed bag. Whilst it stands head and shoulders above such lazy tie-ins as Superman Returns or Batman Begins, it’s also a little too linear to glory in the greatness of The Warriors or even Spider-man 2. Fans of the movies will no doubt love it, whilst the indifferent will perhaps find it too repetitive and linear to rate the full £40 price tag. Ghostbusters: the Game comes highly recommended by this fan, whilst also suggesting that you wait for the price to come down first… or perhaps just a weekend rental.

Email ThisBlogThis!Share to TwitterShare to FacebookShare to Pinterest
Labels: videogames