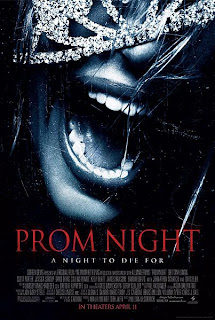 Despite having the same title and vague premise of the 1980s Jamie Lee Curtis slasher flick (no, not that one) Prom Night can hardly be described as a remake. Prom Night can best be described as an episode of The Hills or One Tree Hill with a body count. If that doesn't sound like the worst combination of anything, ever, then you have terrible taste in movies. You'll also probably quite like Prom Shite.

The movie opens with a not completely awful prologue, which sees the entire family of Donna Keppel (Brittany Snow) being murdered before her eyes. The culprit is a former teacher with a deranged crush (Jonathon Schaech). Stopping short of murdering poor Donna, the killer is arrested and committed to a lunatic asylum.

Skip three years later, and it’s Donna’s prom night. Together with her boyfriend, Bobby (Scott Porter) and school pals, she heads out to a luxurious hotel, ready to finally shake off her memories of that terrible night. Unfortunately, our killer has escaped… and he’s out for revenge. What’s a detective (Idris Elba) to do? Put Donna under protection? Cancel the prom? Tell her that the killer’s out for her blood? Well, not quite. The police decide not to say anything, because they don’t want to ruin her prom night. Now I’m no teenage girl (nor is Brittany Snow, but that’s neither here nor there), but I’m pretty sure I’d rather have my prom night ruined than, y’know, die. 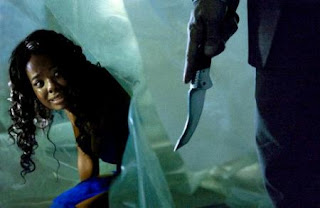 Being a PG-13 piece of studio dross, Prom Night has relatively little freedom when it comes to gore, and violence and, y’know, everything that makes slasher flicks good. There’s no nudity whatsoever, and pretty much all of the murders happen off-screen (even the bodies show no stab wounds when revealed again later in the movie). Donna is so completely, utterly marked as ‘final girl’ that there’s not even any suspense. You’ll be able to see every death coming from a mile away. Incidentally, roughly 60% of the deaths occur in the same room, and are preceded by a stupid teenager wandering around calling out “who’s there?” Hell, even the Bla 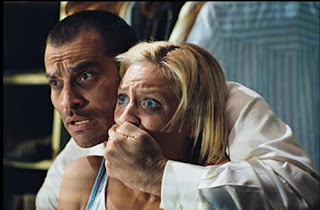 ck Christmas remake (at least, the UK version) had the good sense to shake things up a bit, whilst including a bit of genuinely gruesome gore.

The acting is neither noticeably terrible nor particularly good. Everyone, bar perhaps Schaech’s bug-eyed killer, just fades into the background. This isn’t going to hurt anyone’s CV, simply because you won’t be able to remember who any of the cast actually are.

It’s slickly edited, and the setting looks reasonably pretty, but that’s about all that can be said for the flick. Everything else just feels stupid, lazy and as if it was written by a twelve-year-old.

It's offensively bland, and, because it made 22 million dollars (!) in its opening weekend, further Prom Nights are sure to come.