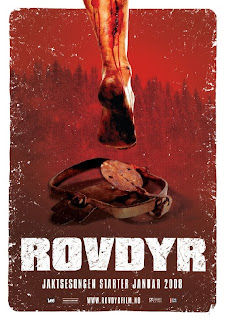 Yet another addition to the vastly expanding pantheon of backwoods horrors, Manhunt is a small Norwegian film in the vein of Texas Chainsaw Massacre or Wrong Turn.


Set in 1974, the story follows four young people out for a relaxing weekend in the woods. During a break at a remote roadside café, the teens decide to pick up an obviously disturbed hitch-hiker. After pulling over to bicker, the four unfortunates are assaulted and knocked unconscious by a gang of particularly vicious yokels. Waking up deep in the forest, they hear the sound of a hunting horn. Guess who the intended prey is.... 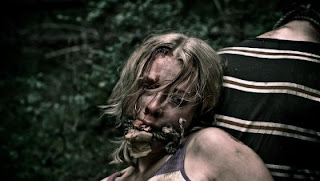 Hey.... Rovdyr people? the TCM called... they want their gag back.

If the synopsis there makes Manhunt (AKA Deliverance 2: The Wrong Turn Chainsaw Massacre) sound particularly unoriginal, well, that’s because it’s an entirely unoriginal movie. Right from the outset, there’s not an ounce of originality to be found, and most of the action tends to revolve around watching distressed youths running through the woods.

It doesn't help that the flick's villains aren't fully realised, nor given enough screentime. Again, they're somewhat reminiscent of Severance's baddies (tooled up loonies, camping out in the woods) and even seem to have nicked a few of their methods too. Manhunt's blatant unoriginality jumps out at every moment.

Still, Manhunt is entertaining and grisly enough to hold the viewers’ attention. The acting is of a decent calibre, whilst the ‘plot’ moves fast enough to divert from the fact that there’s nothing new being brought to the table. Entertaining, if disposable.