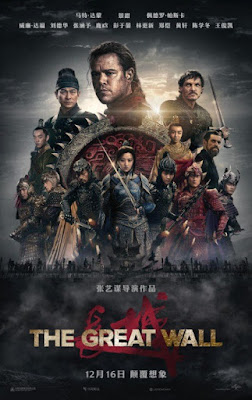 As film fans and frequent cinemagoers, we've all experienced it. You weren't exactly excited to see it, and were lukewarm on the idea at best. Perhaps you were coerced along by a friend or significant other. A film you didn't not want to see, but wouldn't go out of your way to sit through either. Sometimes it works out just fine, a pleasant surprise. Other times, you check your watch ten minutes into the film and pray for the fucking thing to be over already. And that, ladies and gentlemen, is the story of The Great Wall.

As a rule, CGI monsters and I do not get on. If there are hordes of them, and they're computer animated, chances are, I do not give a shit about them. Whether they be zombies (World War Z), Sharknados (Sharknado), Transformers, Transformers 2s, Transformers 3s, Transformers 4s, Transformers dinosaurs, actual dinosaurs (Jurassic World), Orcs (The Hobbit) or generic ugly shits (everything else), if they're in it, there's a high possibility I couldn't care less about them or your movie.

Not unless you can back it up with good character work.  There's a reason the boring Chitauri and Ultron-bots of The Avengers and its sequel didn't make that list of whining - and that's mostly due to the characters, writing and performances elsewhere. In The Great Wall, almost everything is as muggy as the visuals. And the visuals are pretty damn muggy (save for the admittedly excellent costume design). Most muggy and indistinct of all though, is Matt Damon's grumbling, bored performance. 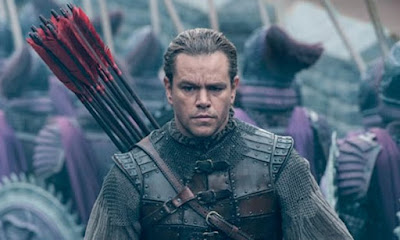 Here he plays a man who has a particular talent for killing monsters - something he does far better than the soldiers of The Great Wall, whose literal job and meaning in life is specifically and only killing monsters. The film throws its non-Matt Damon heroes the odd bone here and there, but it is precisely the Great White Saviour movie that it appears to be. It may not be quite as whitewashed as many had feared, but it is condescending and lazy. I can hardly begrudge Pedro Pascal and Willem Dafoe the work and screentime though, as they're the only fun to be had in it. Tian Jing shoulders co-lead (ish - very ish) next to Damon, but is as wooden and uninteresting as he is, making the majority of their scenes a bore.

Even (especially) the monsters are of the dull, grey, semi-dinosaur variety, and can only be killed by Matt Damon, Deus Ex Magneto, and Cliche. It's a combination of the three which win out in an astoundingly predictable CGI finale - leaving me begging for writers to start tearing certain pages out of the 'Alien Invasion' playbook, and look for a new way of defeating the monstrous horde for once. Ironically, the creatures' most effective sequence is one in which they're barely seen, shrouded in mist and attacking from the shadows.

By drowning the film in grey and brown CGI sludge, The Great Wall loses sight of what should be its greatest asset - you know, The Great Wall. I wasn't expecting full-on Crash Bandicoot: Warped, but Slightly More Colourful Game of Thrones does neither the Wall or the film any favours. Beijing looks slightly better, but never once does it feel like a real place - and certainly not an inhabited one, with stakes we should care about.

Well, at least Pedro Pascal is having fun. The only character without a predictable arc and, crucially, a smile, his charismatic mercenary almost makes The Great Wall worth suffering through, and his double-act with Willem Dafoe (typecast, but fine) gives the film a much-needed sense of comic relief. And, for all the CGI misfortune, at least the 3D is pretty good. It sounds awesome too (although I am a sucker for traditional Chinese folk music). And the scene with the paper lanterns is genuinely moving.

It's these glimpses of goodness make the film even more disappointing - that there's maybe a good movie buried somewhere beneath the rubble of The Great Wall. That movie has more imaginative monsters (like Attack the Block, but on The Great Wall) and doesn't have Matt Damon in it. This hypothetical movie lets the Great Wall actually look great, gives its Chinese actors something substantial to do, and doesn't flub its ending. 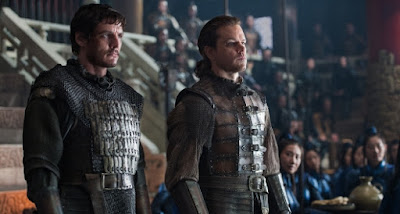