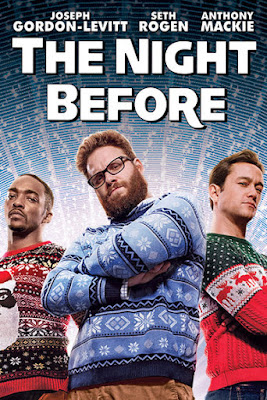 Because we needed something to wash the taste of Filth out of our collective mouths. A Christmas addition to the ever-growing subgenre of high (ish) concept R-rated Bro Comedies that took off in 2009 with The Hangover, and still refuses to die off, nearly eight years later. Mister Seth Rogen has been responsible for more of these movies than most (his delightful Pineapple Express pre-dates The Hangover), usually with the help of a certain James Franco.

But Franco is foregone in The Night Before, replaced by Joseph Gordon-Levitt (who is essentially a more likeable, less weird version of James Franco anyway) and B-list Avenger Anthony Mackie. Old schoolfriends, this mismatched trio of misfits have an annual tradition of going out every Christmas Eve and getting themselves utterly blitz(en)ed, thanks to an undiluted combination of booze, drugs and hotheadedness. But Rogen's Isaac is soon to be a father, and sportsman Chris (Mackie) has hit the big time, making this Christmas their last together. The lonely and heartbroken Ethan (Gordon-Levitt) is determined to make it the best yet... 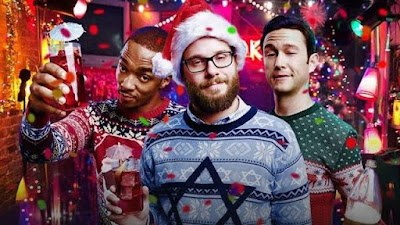 It's a simple plot, and follows a predictable through-line: the friends take a bunch of drugs, get into some zany, risque scrapes, all fall out, feel sad and then (spoiler) reconnect in time for the feel-good ending. What makes The Night Before special, however, is everything which comes between. The film's strongest suit is the sheer chemistry and likability of its three leads. The men bicker, act weird and get up to some morally grey shit, but... well, it's Seth Rogen, Anthony Mackie and Joseph Gordon-Levitt. Just you try being mad at those cheeky little faces. Although Seth Rogen is kind of annoying in this movie, and I say that as a massive fan of Seth Rogen. Here he's like that one friend you have who gets wasted far too quickly on a night out but refuses to go home, and becomes increasingly annoying as the party goes on.

Like everything else though, it's worth it for the payoffs - specifically, dick pics and a great hallucinatory sequence at the end. Almost every joke and setup has a fairly predictable punchline - Chris's weed gets stolen, Jewish Isaac goes to midnight mass, Ethan embarrasses himself in front of his ex, but The Night Before commits hard, and throws in enough strange, subversive or darker touches that it all feels far more original than maybe it is.

Its cameos are too good to be spoiled, but with a supporting cast which takes in Lizzy Caplan, Mindy Kaling and Jillian Bell and Ilana Glazer, the film is more than just men behaving badly. Bell's role is relatively small, but a great alternative to the usual shrewish, nagging wife we'd usually get in this sort of movie. Glazer is similarly fantastic as Rebecca Grinch, who pays wonderfully against Mackie, and even giving him his own action sequence to liven things up.

None of them, however, can hold a candle to The Night Before's real star - Michael Shannon, as the guys' drug dealer, Mister Green. The Christmas present I didn't know I wanted until I saw it, Mister Green is... well, beautifully Michael Shannon, charismatic and terrifying at the same time.

'Transcendent' is a big word and is thrown around far too liberally for my liking. It's a word which almost certainly doesn't apply to a film like The Night Before, and yet here I am, using it. It takes a not-particularly-inspiring template and uses that to apply some of the biggest laughs I've had this year. It's not quite a Christmas miracle, but its stars are certainly bona fide angels in my book. Especially you, Michael Shannon.