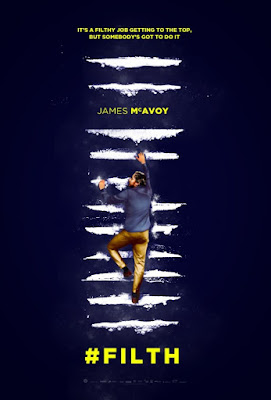 What's Christmassy, you say, about a film in which the life of a corrupt, drug-addled, alcoholic Scottish copper finally falls to pieces, leaving him broken, alone and suicidal? Filth is a film about chronic, self-destructive misery and loneliness during the festive period. Which, in my books, makes it every bit as Christmassy as Santa Claus, eggnog and the Queen's speech. And, if you still need convincing, it has a Christmas soundtrack.

Look, nobody wants to admit it, but being unhappy at Christmas is all a part of the grand tradition. Just look at your seasonal classics: It's a Wonderful Life, A Christmas Carol, and Moe Szyslak's annual suicide attempt ... from the very earliest days of popular TV, literature and movies, writers and filmmakers have been depicting Christmas sadness in its many forms, with varying degrees of darkness. Filth is as black as it comes, making Bad Santa look like Elf by comparison. 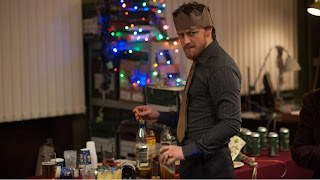 For the first time since 2014, I watched Filth again this year. That doesn't sound like much - I don't watch films all the time, and many (most) I'll never watch again. But this is one I watched at least three times in the year following its release, coming to appreciate and connect with it more upon each viewing. Not only is Filth my favourite movie of 2013, but there's something about it which makes it one of my favourite films of this century, period. Filth is a film which deeply, deeply resonated with the Joel of 2013-14, to the extent where I had to stop watching it for a couple of years.

Spoilers, yes, because of the ending and Bruce's suicide. During a period of five years when I was at my lowest ebb in life and culminating with the 'time to get help' August of 2014, something in Filth - the self-loathing, the guilt, the loneliness and repressed grief of Bruce Robertson- reached out and spoke to me; specifically what I perceived at the time to be his 'taking back control' in his final act. Like I said, pitch black as it comes, almost matching the dark heart of the novel upon which it is based, and almost as good too. Never let them tell you that art isn't dangerous. I wouldn't change it for the world, though.

Now, the technical stuff: Filth is packed with an excellent cast from all avenues of British cinema. James McAvoy is perfectly cast as Robbo, his greasy hair and crap beard (you can still see the chin beneath, which is a problem I also suffer from when trying to grow facial hair) practically emanating stink through the screen. The always underrated Eddie Marsan puts in a funny, sympathetic performance as Bruce's punching bag best mate, and there's Jim Broadbent too, as Bruce's doctor. Shauna MacDonald (adored since The Descent), Jamie Bell, Imogen Poots, John Sessions, Shirley Henderson, Iain De Caestecker and Martin Compston fill out the strong supporting cast, while genre fans should also get a kick out of seeing the fantastic Pollyanna McIntosh show her face too. Its excellent soundtrack (a mix of Christmas songs and retro pop anthems), haunting score and Scottish burr make it one of the best sounding movies out there too.

Blackly hilarious, upsetting, troubling and curiously uplifting at the same time, Filth is the very Scottish answer to Bad Lieutenant and Bad Santa, and a great addition to the always 'fun' irredeemable-people-seeking-vague-redemption subgenre.

As time passes, however, so does one's perspective on art, and life. I watched Filth again in preparation for this piece and, this time, something about it didn't quite click. It remains one of my favourite films of this decade, but a part of me has moved on from Filth. And that's probably for the best.

Related: this piece I wrote for men's health charity The CALM Zone. 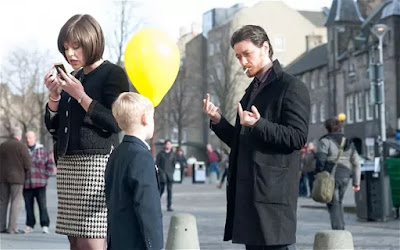