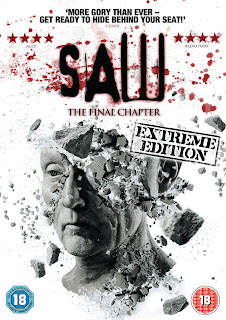 Director: Kevin Greutert (2010)
Starring: Tobin Bell, Costas Mandaylor, Betsy Russell
Find it online: IMDB
Like that one time I drank a whole bottle of Bailey's in one sitting, the Saw franchise leaves feelings of self-loathing, nausea and disgust. All this after a brief feeling of enjoyment and surprise at how good it feels at the time. And, to labour the not-very-good point even more, both alcoholism/gluttony and the watching of Saw movies are disgraceful behaviours and shouldn't be in any way encouraged. There's another crappy point too: both times, I swore 'never again'. And yet I will again, repeatedly, until either my liver or my brain gives in.
Simply by virtue of its extra dimension, Saw 3D will do your brain in faster than any of its predecessors. All the guts and gore and bodily fluids flung at the screen w 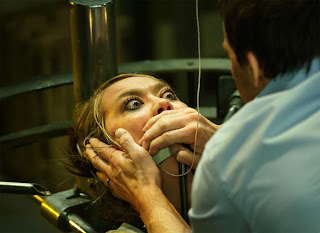 ill titillate every bit as much as they instigate migranes. Although you might as well see Jackass 3D if that's your bag. At least the plot and acting will be better. Minor bitching aside, the 3D lends a certain gusto to some otherwise uninspired traps. The devices here are either too simplistic (a noose? Tooth pulling? Really?) repetitions of earlier glories (those fuckbloody reverse bear traps again) or ridiculously over the top. The final thing sort of resembles a cross between Optimus Prime and Thunderbird 2 and is funnier than it is scary. Saw 3D takes Avatar as inspiration in using its extra dimension: make everything look real pretty and no-one will notice how much it kind of sucks.
Saw 3D picks up exactly where part VI left off. Hoffman (Mandaylor) is pursuing Jigsaw's ex-wife (Russell); apparently the only one who knows his secret. She manages to escape and hands herself in to the cops. Hoffman is infuriated and goes trap-crazy, setting a bunch more silly contraptions into motion. First to die are some kids bickering over a petty love triangle. Judging by this motley trio, Hoffman's begun selecting his victims via facebook and twitter updates. It's all done in public though, which is kinda interesting and what tricked me into seeing the film in the first place. This is very 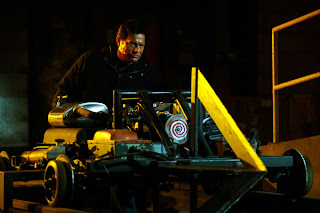 quickly dropped though, and never mentioned again. Likewise, Hoffman's silly little Arrowmobile, so prominent in the trailer, is relegated to a brief dream sequence. Now it's back to business as usual. Namely, torture and Costas Mandaylor doing his Steven Seagal body-double shtick.
Meanwhile, someone is cashing in on Jigsaw's legacy. Self-help guru Bobby (Flanery) claims to be one of the few Jigsaw survivors, despite having never crossed paths with John or any of his disciples. Before you can say 'book deal', Bobby has been kidnapped and ends up trapped in one of Hoffman's dingy torture basements. If you've seen Saw III - VI, there's no surprises here. I even predicted the twist long before I'd entered the cinema. Whilst Bobby runs around a basement failing to save people, Hoffman does his best Terminator impression and cuts swathes through the police force.
I don't believe for an instant that this is 'game over'. The door is left wide open for more sequels. There's no sense of deconstruction or climax or finality to anything. True, there's more of an effort towards companionship to the original movie. Cary Elwes makes a glorified cameo, Jigsaw has yet more whingeing to do and another message to impart. It's just hard to care anymore. Not even the sight of fat Cary Elwes doing a bad Christian Bale/Dr. House impression can aleviate our overfamiliarity with the franchise. Still, it's got more going for it than parts V and VI, and is innocously sort of engaging until you bother to stop and think about it. It's thoroughly mediocre, which at this point in the fumbling franchise, is a definite improvement.
The Final Chapter plays better on DVD, shorn of its 3D gimmick and expectations. Embrace the shlock and ignore the bad, and there's fun to be had. And finally, now it's all over, you can rest easy and buy the complete box set without having to worry about there being another one to mess up your collection. Well, at least maybe not for awhile.