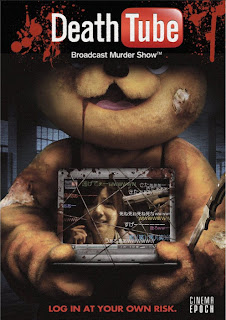 Director: Fukuda Youhei (2010)
Starring: Shoichi Matsuda, Wataru Kaoru
Find it online: Amazon UK, Amazon US
If Jigsaw was a bit of an Icarly wannabe and didn't have as much money and whinged less and wasn't in as many sequels, he might produce something a bit like Death Tube. Except there's a big yellow teddy bear instead of a puppet and it goes on for a bit too long. There's also the sneaking feeling that you already saw this movie back when it was called Untraceable and starred Diane Lane.
For all of its Internet commentary and affectations of modernity, Death Tube doesn't even have an IMDB page. And it certainly doesn't have Diane Lane. It doesn't even have Stephen Dorff. What it does have is half of the Youtube logo (I'll let you look at the title and guess which) and a really really nasal Bear encouraging its victims to mutilate themselves and betray one another. Poor Saw bear couldn't even afford so much as a tricycle - his traps and gadgetry consist largely of rubiks cubes, hula hoops, poisoned doughnuts and what I assumed to be a wrecking ball but probably wasn't paying attention. Well, he must have spent all of his money on the domain name. And yes, I did just type the URL into Internet Explorer. For the record, fear.com isn't much cop either.
It's perfectly fine but instantly forgetteable and goes on for a bit too long. It having a twist feels obligatory rather than organic - as though it's only there because Saw had a twist too. It's not obvious, but serves no real purpose and is forgotten as quickly as it's introduced. That said, the moustache bear is creepy enough and at least we won't have to put up with seventy-odd sequels afterward. Never mind any DeathTube - the real thing is scary enough (link very NSFA).