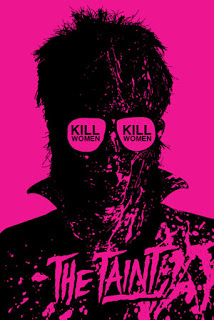 
Comes loaded with a perfectly apt moniker. I certainly feel tainted by this movie. The Taint is like The Crazies, only filtered through the likes of South Park, John Waters and elements of Peter Jackson's Braindead. It's one of the most gleefully obscene things I've ever seen. The Taint is a movie which you couldn't even begin to synopsisis-se for your mother without getting an earful. If you thought The Human Centipede was bad (bless you) well, you've never seen a man on a skateboard, draped in an American flag, shooting at bulging boners with a .44 Magnum. It's a bizarre movie, relishing its low budget rather than being constrained by it. It reminds me of the cult TV show Darkplace. Only a lot more disgusting.


To be sure, The Taint isn't everyone's cup of tea. Those with a low tolerance for gross-out humour and bodily functions would be well advised to keep clear. Likewise, those who like their flicks with Hollywood gloss won't get on with the Troma-esque gonzo splatter and intentional trashiness. But that's fine - I've seen enough over-serious STD bores to last a lifetime. I'll take mine with a sense of humour, lots of cock and a streak of horrid inventiveness any day, thank you. Consider me proudly and forever Tainted.