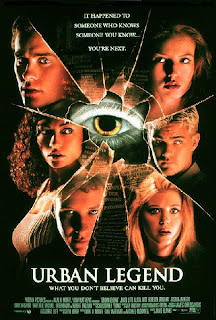 Director: Jamie Blanks (1998)
Starring: Alicia Witt, Jared Leto, Rebecca Gayheart, Tara Reid
Find it: IMDB, Amazon
In my early days of horror fanaticism, my movie-watching record was spotted with a number of now-embarrassing blotches. My two most favourite and often-watched horror flicks were Freddy's Dead: The Final Nightmare and Urban Legend. Urban Legend, I'd recorded off've the TV and watched at least once a month on VHS. I think I still might have it buried behind a cupboard somewhere. I'm now in the awkward position of having watched Urban Legend more than I have A Nightmare On Elm Street or even Scream, the very movie which it rips off so shamelessly. Well done on making Future Me sound like an idiot, stupid Me From The Past. Although mother wouldn't let me watch The Texas Chain Saw Massacre, so you can't really blame Me From The Past for taking whatever he could get.
Indisputable bollocks as it might be, Urban Legend has its moments. Granted, all of those moments are stupid, but some of them star Robert Englund and Brad Dourif. My favourite moments all have Lex Luthor in them. The cast is full of people I recognise now, so it's odd to watch Urban Legend nowadays. You got Lex Luthor (although his having hair threw me off), Jared Leto, Tara Reid, Joshua Jackson and Danielle Harris. Ew, I'm disgusted to admit that there was a point in my life where Urban Legend was my favourite Robert Englund movie. Well done again, Stupid Me From The Past. 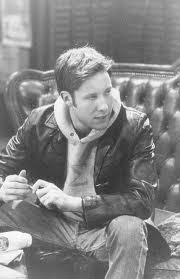 Watching it now, Urban Legend is a lot less bloody than I remember it being. The kill scenes are mostly bloodless. The most disturbing thing is seeing Lex Luthor with hair. I jest now, but the bit where someone microwaves Luthor's dog fucking traumatised me as a child. As did the following kill where Luthor is forced to drink drain cleaner. While we're at it, I find it hard to believe I didn't notice how atrocious Tara Reid's acting is when I watched it as a kid. I must have been distracted by how genuinely unsettling I found the film.

Script Fail: How does one bite down "real hard" on a tape gag?
The story is a complete and shameless rip-off of the likes of Scream and the equally unimaginative I Know What You Did Last Summer. It's the sort of thing that is set on a college campus and has nobody believe its heroine (Alicia Witt) when she says that there's a killer on the loose. Even when it's patently obvious that she's right. Also patently obvious is the killer's identity. It's obviously not going to be the creepy teacher or the creepy Brad Dourif or also the potentially creepy boyfriend, but Urban Legend continues with the pretense anyway. I do like the parka and leather gloves look though - it works just as well as Scream's Scream.
Like Freddy's Dead, I'll always have a little soft spot for Urban Legend. Sure, I realise now that it's complete crap, but this is the complete crap that set me on the road to horror righteousness. When other kids my age were agape at The Fast And The Furious, I was busy watching my Urban Legend VHS to death. When you put it like that, who's the real idiot? (Hint: still me).