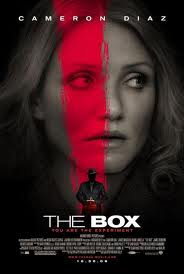 Director: Richard Kelly (2009)
Starring: Cameron Diaz, James Marsden, Frank Langella
Find it: IMDB, Amazon
At silly o' clock in the morning, Norma and Arthur Lewis (Diaz & Marsden) are rudely awoken to find a mysterious wee box on their doorstep. It's adorned only with a big red button. A mysterious stranger (played by Frank Langella) later arrives at their house and offers them a deal: press the button and receive $1 million. But someone, somewhere in the world will die. Can the seemingly quite nice Norma and Arthur bring themselves to do it? Maybe they can spend some of the money buying Norma a less stupid name. Although these are the 1970s. I suppose people called Norma were all the rage, otherwise we wouldn't have so many pensioners called Norma now.
Also, Norma doesn't have any toes on her right foot, which really pissed off that totally pretend foot fetish I made up yesterday. She's not alone though, Frank Langella is missing half of his face. The inevitable moral wonderings soon give way to cosmic nonsense of the highest order. A later scene sees James Marsden step into a liquid box reminiscent of something out of 2001: A Space Odyssey. This isn't 2001: A Space Odyssey though, so its trying just seems daft. Admittedly, the psychedelic music and wallpaper and James Marsden's sideburns are fun.
The Box is ambitious but silly, disposable guff. It's an amusing concept, but not deserving of its extended runtime. Stick with the Richard Matherson short story Button, Button or Twilight Zone episode instead. Like Frank Langella constantly turning up at the Lewis' home, this one outstays its welcome too.

Email ThisBlogThis!Share to TwitterShare to FacebookShare to Pinterest
Labels: sci-fi