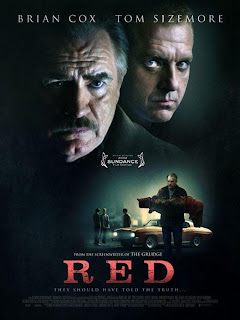 Director: Trygve Allister Diesen, Lucky McKee (2008)
Starring: Brian Cox, Tom Sizemore, Noel Fisher
Find it: IMDB, Amazon
Stars Brian Cox as an ass-kicking old man. But this is not the Red you're thinking of. This is a far more subdued affair, with Cox quietly mourning the death of his beloved doggy Red and not making moves on any Dame Helen Mirrens.
Cox plays Avery Ludlow, a reclusive widower who lives a quiet life of fishing and relaxing with dog Red. During one fateful fishing trip, Ludlow and Red happen across a trio of delinquent youths who attempt to rob the old man. Out of spite, the most vicious of the kids (Fisher) shoots Red dead in the head. Seeking justice, Ludlow finds the boys' respective parents and appeals for them to do the right thing. The brats deny everything and the parents simply dismiss poor Ludlow. Still though, the old chap doesn't go as Harry Brown as one might expect. This is no average old-bloke-on-the-rampage movie.
Which is refreshing. I'd signed up to see Brian Cox blast ten shades of bollocks out of some hoodies, but what I got was something more fulfilling and even a little sweet. Ludlow, unlike Michael Caine or Charles Bronson isn't out for revenge; there's a difference between justice and vengeance, see, and Red realises this. So whilst there is violence, you'll find it avoidable at every turn. Ludlow is persistent and forceful, but not out for blood. At least, not initially.
If ever there was a brat to deserve the Could You Kill A Child treatment (answer: yes), it's Noel Fisher's Danny. Danny is a classic Jack Ketchum villain. With no redeeming features and easy to hate, he makes it very easy for us to root for Ludlow. And he's backed up by an even more despicable, sleazy Tom Sizemore. Robert Englund pops up in a surprising cameo as a sheepish father. Red is brilliantly acted, even by the kids and dogs. Red is the exception to that one rule about kids and animals.
It's one of the few Jack Ketchum novels I've not read (it's on my to-do list) but surprises with its subtlety and restraint. Even the emotion - I expected to be weeping like I did at Jurassic Bark - holds back a little. Which is good. I don't think I could handle this all over again:
At first I thought that Cox's Avery didn't seem to be particularly broken up by the death of Red, but you'll understand why over time. There's far more going on than the death of a dog. Shocking revelations are made. There's a fist-pumpin' moment with a baseball bat. Robert Englund wears a vest.
Red is the best adaptation of a Jack Ketchum novel so far. Dog lovers though, beware.