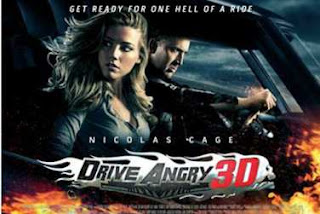 Director: Patrick Lussier (2011)
Starring: Nicolas Cage, Amber Heard, William Fichtner, Billy Burke
Find it: IMDB, Amazon
The movie Death Proof should have been. Everything a Grindhouse movie should be. Everything a Nicolas Cage movie should be (sans dressing like a bear and punching women in the face). Everything 3D cinema should be. Drive Angry is the most fun you'll have with a movie this side of a Piranha.
Nicolas Cage breaks out of Hell to save his baby granddaughter from Satanic sacrifice. He hooks up with a sweary, ass-kickin' Amber Heard and tries to fend off the cold determined might of William Fichtner, who has been tasked with dragging Cage back to Hell.
As the title might suggest, he does this whilst driving a car and looking very angry. And then, just when you think it couldn't get any better, Tom Atkins appears as an equally angry cop. And then there's a Meat Loaf song over the closing credits. What I'm saying is this: Drive Angry is the very pinnacle of modern cinema. Give up, go home. There will never be a better action movie than Drive Angry.
I loved every moment of it. Nicolas Cage plays a character called John Milton (geddit) who has stupid hair and looks angry all the time. Milton is a cross between Cage's character in Con Air and The Terminator. If Milton is Drive Angry's T-800, then William Fichtner is his T-1000. He doesn't so much steal scenes as he does the whole movie. When William Fichtner is onscreen you'll be looking at William Fichtner. And when William Fichtner isn't onscreen you'll be wishing William Fichtner was onscreen. The man effortlessly owns every scene in which he appears.
It's a good job I can't drive, because I'd be a right menace having just watched Drive Angry. The vehicular carnage is bested only by the fantastic gunplay and fight scenes. There's an action sequence in which Cage kills a whole gang of assassins during coitus. He kinda sucks at driving though; his general tactic seems to be just to drive down the wrong side of the road whilst looking angry. Although he doesn't cry, which is more than we can say for Kurt Russell.
People who like their movies to be not ridiculous will enjoy Drive Angry considerably less than I did. For me, it's Cage's best movie since Con Air (my favourite of his movies, and perhaps my favourite action movie of all time) and more than makes up for the disappointment of Ghost Rider. Okay, its main villain (Billy Burke as a cult leader) is a bit rubbish and there's a spectacularly bad FX cock-up later on, but Drive Angry is difficult to argue with. It doesn't take itself too seriously and it has Nicolas Cage with stupid hair. Amber Heard's character is just window dressing, but she does this sort of thing well, and goshdarn it, she's just adorable. I got more than a little jealous during the scene in which a guy paints her toenails. What I wouldn't give to paint Amber Heard's toenails.
Yes, I love Drive Angry. It has Nicolas Cage with crap hair playing a man called John Milton, William Fichtner being a legend, Amber Heard driving my foot fetish crazy and The Meat Loaf on its soundtrack. Drive Angry is the greatest movie I have ever seen.