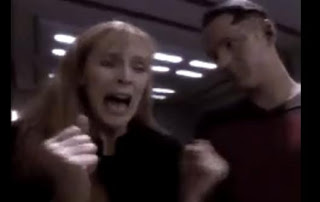 Two things that don't go very well together: Star Trek and real world issues. I know Captain Kirk came close once or twice (generally in evil twin mode), but it was in the 1992 Next Generation episode tellingly entitled Violations that Star Trek took a startling and uncharacteristically dark turn.
I plop you not, Violations gave me nightmares as a child. So did Kenneth Branagh's Frankenstein and The Beano, but we'll overlook that for now. It combines Freddy Krueger-esque dream antics with unpalatable brain rape to create what might be the most disturbing Star Trek episode you'll ever see. You'd think that might be a good thing, but I don't want to be disturbed by Star Trek. I watch Star Trek to oggle Marina Sirtis' boobs and Jonathan Frakes' epic beard. And I was a child at the time. Thanks for the mental trauma, Star Trek.
In a standard space envoy mission, the starship Enterprise conveys a delegation of Ullians to Calder IV. Forgive me, non Trekkers won't have understood a word of that last sentence. The Ullians are a telepathic lot who amble along helping others retrieve lost memories. One of the Ullians is a little more aggressive in his brain-reading, and sets about invading people's memories, inserting random horrible bits as he goes. His first crime sees him violate the uninteresting mind of uninteresting character Deanna Troi (Sirtis), having an otherwise nice memory turn horrible when on/0ff lover Will Riker (Frakes) gets all gropey on her. This horrible and quite literal mindfuck puts Troi in a coma. Quick to follow are Riker, the ship Doctor and Captain Picard himself (Stewart). Even scarier than the story is Patrick Stewart's fake hair in this nightmare sequence: 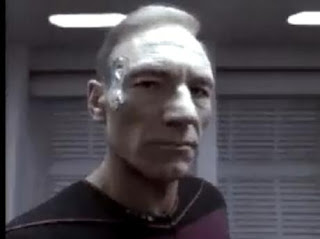 As the episode title suggests, far more is going on here than simple Dream Demon shenannigans. The episode writers and director are quite obviously trying to create a rapey subtext. Subtelty and sensitivity, Star Trek is not thy name. Rewatching it now as an adult, the episode isn't very scary. In fact, those once-traumatic nightmare sequences now seem a bit overserious, melodramatic and silly. But it goes to show how much of an affect it had that even now, watching Violations gives me chills. But mostly, it goes to show how stupid children are. Or, more specifically, how stupid I child I was. Am.

The theme was revisited again in Star Trek: Nemesis. Mind you, that's what happen when you let Tom Hardy near a Star Trek movie. We don't expect it from the cuddly Next Generation crew. Thankfully it's all forgotten by the next episode. By the by, you might want to clear your Internet History after this. Not because of its adult nature - but you don't want anyone to find out you've been reading up on Star Trek, do you?