Not what it says on the tin: Funny Games 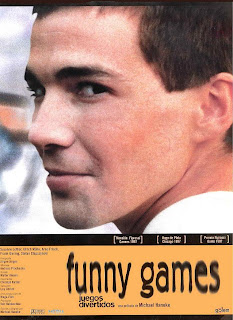 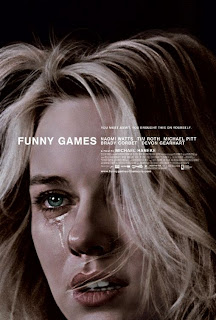 [About as funny as Family Guy: The Video Game]
A film so great that Michael Haneke made it twice. Or one would think so, judging by the obsessive attention to detail in its remake. Near enough a shot-for-shot, word-for-word remake, Funny Games '07 only avoids complete pointlessness thanks to it being slicker and directed by the same fella as the original piece. Shitty remakes have come before and shitty remakes have come after, but few will be shitty on quite the same (shitty) level as Funny Games.
Arthouse torture porn, that's how the broadsheets describe Funny Games. A bit like AntiChrist or Martyrs, but more pretentious, self-regarding and with a tabloid mentality. If you enjoy any of Funny Games' goings-on, then you're a bad person. To his credit, Hanek 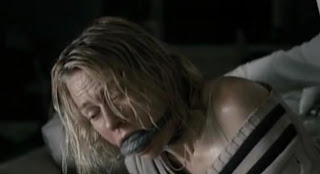 e puts Naomi Watts in her underwear and makes it unenjoyable. For that, I think Michael Haneke is a bad person. Tim Roth and Naomi Watts are pretty much the only watchable people in the '07 version of the movie. The killers are too smug and twattish, whilst the family's kid is just a cheap gimmick.
In the '97 original piece, there's the advantage of having relative unknowns playing out the cast. It makes the movie feel a little more powerful, creepy and less Hollywood. All involved give good performances although, again; the killers are too smug and twattish, whilst the family's kid is just a cheap gimmick.
There's nothing wrong with subtexts that critique violence in movies, but Funny Games is just heavy handed, judgemental nonsense. I'm not sure who the target audience is supposed to be: it's too intense for those who don't like horror, and spends too long insulting those who do. It'd be like someone making a romcom and then having the male lead be an emotionally abusive sparkler asshole who sparkles treats the heroine like crap. Although I daresay its US cinema release may have confused the occasional gorehound looking for another cheap torture guff fix. Bollocks as Funny Games is, this thought kinda amuses me.
Both versions do have their worthwhile moments. Haneke's use of tension is exceptional, particularly during the antagonists' initial conversations with the respective couples. Likewise, his use of violence works very well. There's very little physical violence depicted onscreen, although you'll think there was. Perhaps It'd work better if Haneke had let his work speak for itself, rather than having the characters lecture us throughout. But therein's the problem with auteurs, I suppose. Technically brilliant - ego up the wazoo. In not liking Funny Games, its detractors are easily dismissed by Haneke as bloodthirsty horror idiots. The following score stands for both versions: