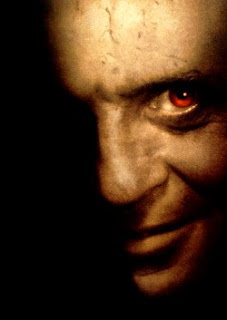 A now-ginger and less lesbian Clarice Starling continues her hunt for the escaped cannibal Hannibal Lecter. Meanwhile, a chewed-up looking Gary Oldman trains some pigs and Hannibal saunters around Italy, taking in the artwork and scenery. Also, Ray Liotta gets the finest death scene in the whole series.

Hannibal takes place ten years after The Silence of the Lambs, and pretty much concludes the stories of Hannibal Lecter and Clarice Starling. Prequels Red Dragon and Hannibal Rising (*shudders*) would follow, but you'll be lucky to ever see Hannibal again following the events of this swansong. Although you never can tell with Hollywood. It wouldn't entirely surprise me to see a one-handed Lecter once more on the run, this time in space or in Da Hood perhaps.

Hannibal isn't really in the same league as its predecessor, but neither is it anywhere nearly as bad as Red Dragon or Rising (*shudders*). And, if you've ever read the book upon which it's based, you'll know that it could've been a hell of a lot worse. That said, there will always be a part of me curious to see what Hannibal and Clarice eloping would have looked like. Terrible, no doubt.

Hiding in Italy, Hannibal is living the high life. That is, until old foe Mason Verger (Oldman) has a price put on his head, and he's discovered by a local cop. Much of the cat-and-mouse stuff in Italy seems to drag, enlivened slightly by Hopkins and the all-around quality of the cast. It's nice to see a few other faces from Silence show up too, although Jodie Foster's presence is missed most of all. That said, Julianne Moore makes a fine Starling. She never comes across as being as strong as Foster's take on the character, but you still wouldn't mess. And her vulnerability makes her relationship with Hannibal that little more plausible. 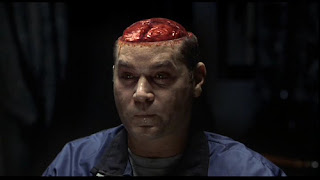 For once, Dave Lamb's Come Dine with Me narration was lost for words.

Once the movie leaves Italy, Hannibal becomes noticeably more entertaining. Hannibal and Clarice get to share a bit of much-needed screentime, Verger sets his vengeance into action, and Hannibal is menaced by maneating pigs. It's to Ridley Scott's credit that he can make his movie feature MANEATING PIGS and not have the audience in peals of laughter. MANEATING PIGS are fucking stupid, but thanks to the tone and its handling, Scott manages to pull it off.

And then we have Ray Liotta hosting a dinner party with his brain as the main course. This alone justifies the movie's existence. But even with the novel's ridiculous ending excised, the finale flirts with idiocy. It has just enough class and excitement to not entirely ruin everything that's gone before. It feels a little anticlimactic and something of a non-event, but is mostly tolerable enough. Ultimately, Hannibal is a fitting farewell to arguably the finest movie psychopath since Norman Bates.