Yet another of those damn 'Best of' lists... 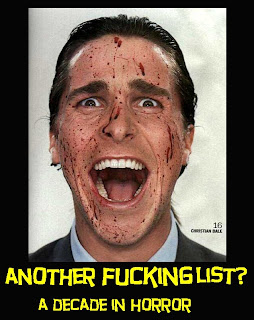 Well, everyone else is doing it. And, being a registered LAMB, I might as well join in with the other sheep (get it? Lamb... like a sheep... GET IT) and offer forth my own favourite movies of the past decade. There's a top three movies from each year, plus an overall winner at the end of the list: my favourite movie of the decade. And there's a booby (hyuk yuk, I said booby) prize for the worst too.
2000!
American Psycho
Cherry Falls
Hollow Man
2001! (A dodgy year for horror, hence a bit of barrel-scraping in the top three here).
Ghosts of Mars
Jason X (fuck off. I liked it)
Ichi the Killer
2002!
Dog Soldiers
Bubba Ho Tep
28 Days Later
2003!
Wrong Turn
Oldboy
The Texas Chainsaw Massacre
2004!
Dawn of the Dead
Shaun of the Dead
Hellboy
2005!
The Descent
Three... Extremes
Land of the Dead (disappointing, but enjoyable)

The Hills Have Eyes
Slither
Feast
2007!
Death Proof (fuck the fuck off. I really liked it)
Planet Terror
REC
2008!
Martyrs
My Name is Bruce (flawed, but I loved it)
Midnight Meat Train
2009!
My Bloody Valentine 3D (yes, I enjoyed the hell out of it)
Zombieland
Drag me to Hell
And now, without further ado - my most favourite and most loathed horror movies of the decade. One of the two selections will come as no surprise to anyone who has even a passing knowledge of this site. 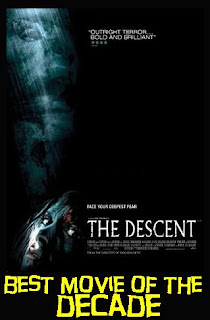 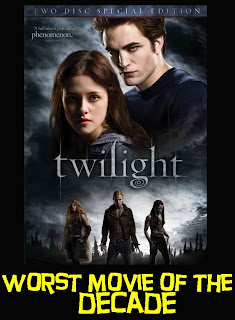 Cue a great deal of whingeing, "why didn't you include ___" and "how dare you include ____" in the comments below. A belated happy new year to alla' y'all. And here's to another ten years of shitty horror reviews.