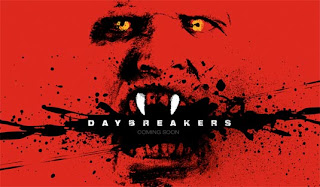 Director: The Spierig brothers (2009)
Starring: Ethan Hawke, Sam Neill, Willem Defoe, Claudia Karvan
Find it online: IMDB
A world populated mostly by vampires is far more functional than movies such as I Am Legend would have you believe. Whilst Will Smith’s bloodsuckers spent their days skulking in warehouses and letting the world go to waste, Daybreakers has them properly ruling the world; as the opening credits roll we get vampire TV, vampire Starbucks, vampire-adapted cars and vampire chavs.

Ethan Hawke plays a vampire called Edward, and he doesn’t, at any point over the movie’s running time, sparkle. He’s a haematologist, trying to create a blood substitute. Because the greedy vamps have decimated 95% of the human population, there’s a thirst on. Being a reluctant vampire, Edward refuses to drink blood and desperately wants to save humanity from extinction. Meanwhile, Boss Man Charles Bromley (Sam Neill, on fine slimy form) wants to farm the humans for their blood and sell it at a high profit.

Thing is, if Daybreaker’s vampires don’t drink blood, they start to degenerate – eventually turning into bat-like zombie hobos, so stupid that they’ll even turn on other vampires to quench their thirst. Doc Edward best hope he finds a blood replacement soon, because things are looking grim. It’s little wonder that vampires seem to be constantly smoking. Non-smokers will definitely hate this movie, since Edward perpetually seems to be wandering around with a fag in his mouth.

On his miserable travels, Edward happens across a band of humans, led by ex-vampire Willem Defoe. Apparently Defoe has himself a cure for vampirism. Full of self-loathing and general Ethan Hawkiness, Edward joins forces with the humans in an attempt to cure himself. Cue several messy fights, decapitations and well-done action set pieces. 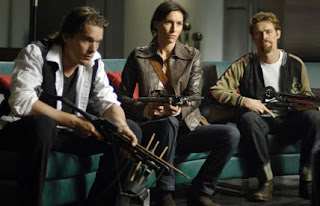 It’s pitched as a cross between The Matrix and 28 Days Later but is actually like neither of those movies. Daybreakers actually reminded me more of a cross between Equilibrium and Blade. But I can see why they wouldn’t want to mention Equilibrium on the posters. Thankfully, it’s much better than that particular BaleBat-turd. It’s an interesting world which the vampires live in; slightly reminiscent of the reality suggested in True Blood (albeit with the vampire/human balance more than slightly skewed). It's a fun idea, and one I wouldn't mind seeing revisited in sequel form.

Ethan Hawke does his Ethan Hawke thing, and it works well here; few actors do the tortured action man thing like Hawke, and it definitely suits the character. He’s ably supported by Neill and Defoe. Bromley is undeniably a great villain, and adds a nice element of meanness to the movie. Willem Defoe is cool in everything, and is no different here. His character – nicknamed Elvis – looks and feels like a long-lost brother to Zombieland’s Tallahassee. It's just a shame that he doesn't get to share any screen time with Neill. There'd undoubtedly be sparks to be found there.

Alas, vampires have been overexposed as of late, and that hurts Daybreakers cause. Cool and fun as it may be, there’s always the overriding feeling that you’ve seen it all before. Of the other downsides, there’s a few too many Deus Ex Machina, and some of the characterisation is a bit predictable.
But despite its minor flaws, Daybreakers is a strong start to 2010 (at least, in the UK it is. It came out last year in the US) and an excellent reclamation of credibility for the otherwise loved-up and limp vampire subgenre.