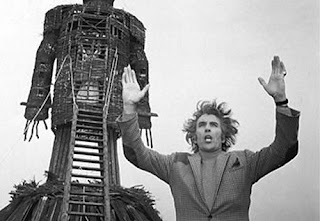 Director: Robin Hardy (1973)
Starring: Edward Woodward, Christopher Lee, Britt Eckland
Find it online: IMDB, Amazon UK, Amazon US
Because TV schedulers here in Britain seem to have a thing for showing The Wicker Man every New Year (literally; I’ve watched it every year for the past three or four years) why not shoot off a few thoughts from my opinion-hole?

I first became aware of The Wicker Man at an age when I was far too young to do so. It was on New Years’ Eve, in fact, and I was about ten. New Years’ Eve being a time for stopping up past one’s normal bedtime, I got to avoid Jools Holland’s annual Hootenanny thing in favour of 1973’s The Wicker Man, which my hippy parents were very much a fan of. I didn't remember the rest of the movie, but that ending - and this movie - stuck with me until I was old enough to give the thing a proper viewing.

For the uninitiated, The Wicker Man is a Hammer Horror that takes place on a small little island somewhere off the British coast. Enter Police Sergeant Howie (Edward Woodward), called to investigate an anonymous report of a missing girl. Once on the island, Howie receives a very frosty reception, and notices that the residents are all behaving rather oddly – even the missing girl’s mother, who seems completely unbothered by her child’s disappearance. Whereas Nicolas Cage would have solved this by punching some bitches in the face, Sgt. Howie decides to stick around and investigate. 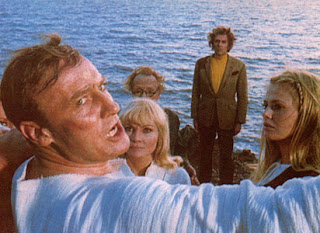 Just out of shot: Nic Cage riding in on his bicycle to save the day
Hopefully, you’d know this already. Howie’s investigations lead him to the doorstep of the island’s spiritual leader – Lord Summersisle (Christopher Lee) – who is also behaving rather oddly. Damn hippies. There are also, sleazes will be glad to know, quite a lot of scenes which see naked youths dancing around fires and flouting their sexuality at the virginal, repressed, Christian Howie. Chief amongst these scenes – almost as iconic as the titular Wicker Man – is barmaid Willow (Britt Eckland) who harasses poor Howie at night by dancing around naked and bouncing her lady-bits off’ve doors and suchlike. A scene which, incidentally, led husband-at-the-time Rod Stewart to attempt to have the film banned.

Inevitably, Howie’s investigations lead him into troubled waters. You should probably know how the movie ends by now, but far be it for me to spoil that for you. Wicker Man’s denouement is my favourite movie ending, ever. The movie is excellently acted by all involved (even Eckland, who admittedly doesn’t have to do much but be sexy and naked) and turns traditional horror tropes on their heads wonderfully. It all takes place in the daylight; there's next to no action or violence; no blood. The horror of it comes through the sheer unfamiliarity of the situation; it's in the villagers' friendly-yet-creepy demeanour; and it shines through in that truly wonderful, emotive climax. Religious fanatics are always scary. The Wicker Man will make you fear even the humble hippy.

I don’t have a bad word to say about The Wicker Man, which might make this a rather uninteresting review for some. For those who find The Wicker Man too slow, too English or non-actiony, they’ll always have the Nic Cage remake to content themselves with.