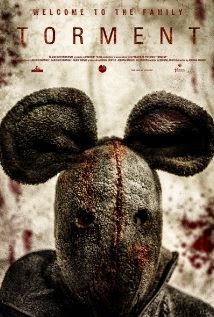 One day, Katharine Isabelle will make a horror film worthy of her talents, living up to the mighty Ginger Snaps. Until then, there's Torment. A dour, drab, donkey punch of a movie, it wastes its good cast and strong concept in a dull re-do of You're Next, minus the wit or inventiveness. It does have serial killers in animal masks though, which is right on my money every time.

Isabelle and Dunne play a recently married couple, heading off to his holiday home in the country for a little family time. Things are complicated by two things: his son (from a previous marriage, with a dead wife) being a twat to his new mother, and a home invasion visited upon them by a cult of mask wearing loonies set on stealing said twat away from his family. The first is easily worked around (via a great conversation in which daddy tells his son that, if you're lucky, mummies die, and sometimes you get two). The second: not so much.

You know the ritual: an awkward road trip, a creaky home, missing neighbours, friendly local cop (hello Stephen McHattie) and ominous signs. Little Liam goes missing in the middle of the night and his handily oversized teddies are found beheaded in the garden. Next thing you know, ma and pa are beset by the aggressors, who come at them with axes, rifles, various torture implements and useless bondage. First to free herself, Sarah (Isabelle) must battle to stay alive and rescue the wee rat getting in the way of her and a happy marriage. This she does with considerably less competency than we may have been used to of late: forget the kick-assery of Sharni Vinson, Pollyanna McIntosh (White Settlers) or Wrenn Schmidt (Preservation) Isabelle gets to be about as passive as they come here. There's a time and a place for that sort of retro Scream Queenery, but that time is usually the 1970s and the place is The Texas Chain Saw Massacre or Halloween. Cynical haters of nice people winning against the odds rest assured: any victories that might occur in Torment are purely Pyrrhic.

Still, there's enough at play here to keep the thing afloat for its duration. The bad guys look pretty great, in a grubby, hillbilly kind of way, while its atmosphere is similarly down-and-dirty. The story nips along at a fine pace, being over before one has time to really gripe about it, and Isabelle is likeable as ever as the female lead. It's a better use of her time than the inexplicable See No Evil 2, but only barely. Torment does just the bare minimum to stay out of completely forgettable territory; it's not quite a Mickey Mouse operation, but straddles the line.

(Sorry, I already used my 'torment' joke on the other one).