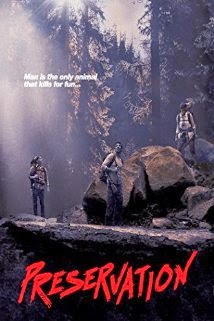 Good, but I preferred it when it was Eden Lake. A couple and their brother (or in-law, depending on whose perspective you go by) and his dog (a dog, by any perspective) take off to the American woodlands to indulge in a little hunting. Squeamish at first, anesthesiologist Wit (Schmidt) is quick to change her tune when they are beset by murderous masked men and their rifles.

The main reason to stick with Preservation is for its performers - a hardy bunch who make it worth bearing with the cliched setup and action. As the wonderful Pollyanna McIntosh made the otherwise fairly forgettable White Prey, so Wrenn Schmidt's lead performance is the film's strongest asset. It's a great transformative role which leaves her almost unrecognisable by the time the end credits start rolling. Talking of unrecognisable: I watched this for over half an hour before I realised where I recognised that Pablo Schreiber fellow from:

As evidenced by my fetish for ex-LOST actors, one of my favourite things is seeing performers from beloved TV shows pop up in genre movies, so I was overjoyed to see Pornstache (sans pornstache) show his distinctively odd mug here. Everything else is by-the-numbers cliche counting and fairly predictable action. I'm willing to bet that the American bear trap industry makes more money from horror movie props than it does helping people actually trap bears. If I were writer/director Christopher Denham, I'd ask for my money back for his bear trap, though; one character emerges with little more than a slightly punctured foot after accidentally stepping on one. I doubt a bear would even notice that shit, let alone be trapped by it.

It perks up a little towards the end, but that's not enough to make Preservation feel anything other than utterly middling to half-decent. The only thing being preserved here (obvious joke) is an abundance of cliches.