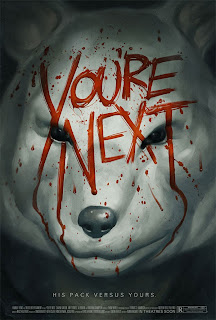 A promise; a threat; a great title. You're Next is that most immediate of horror films, the home invasion thriller. It's also maybe slightly ironic in a way I can't quite work out, in that You're Next wasn't 'next' to get released - it was sat on a shelf for two years after its completion. An inexplicable decision, since it's really rather good.

A family of bickering posh people meet and their parents' grand county home to celebrate a wedding anniversary. Felix (Bowen) is the once-chubby middle son, bringing student Erin (Vinson) home to meet the parents. The name of the game is awkward familial interaction, although it doesn't take long for the tale to take on a more (physically) vicious edge. As the family gather for dinner, a gang of nasty masked psychopaths begin firing crossbow bolts through the window, murdering neighbours and picking off the siblings and their lovers one by one. They haven't, however, counted on one of their victims having something of the Bear Grylls about her. Even better, the family mater is played by Barbara Crampton, from off've some of the greatest horror films of all time. 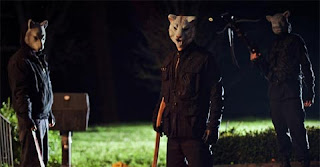 Inventive, gleefully violent and a lot of fun, You're Next was most definitely worth the wait. Both the killers and the family are well-drawn, if rarely sympathetic. It's not quite as clever and unpredictable as it thinks it is (I saw several plot and character beats coming from quite early on) but it's a refreshing change that it tries. It's like Cabin in the Woods, shorn of (most of) the abiding smugness. It also has its killers wearing animal masks, which I have a strange thing for, in my horror films. 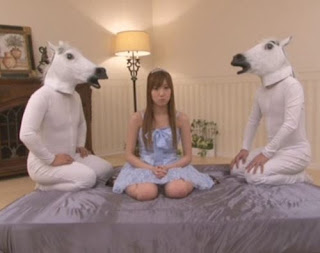 And in the bedroom. Oo-la-la.
(I have no idea what is going on here).

While it may not be the superlative horror film you're going to hear it is over the next year or so, You're Next is delightfully smart, nasty and subversive. You're Next should most definitely be, well, Next on your shopping list, Netflix queue or whatever (predictable joke).