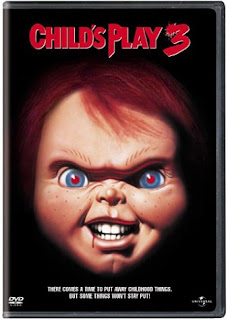 
Not long ago, I revisited Rob Zombie's Halloween films, and was jolly surprised to find that the opinions of my 21-year-old self weren't quite as reliable as I believed them to be. To be frank, 21-year-old Porkhead was kind of a ballbag. Well, he was the sort of dude who'd call his blog 'Porkhead's Horror Review Hole'. What do you expect? In eager anticipation of the latest Child's Play reboot/sequel, I found myself watching all of the old Chucky films. Which, in turn, led me to revisit Child's Play 3, and my old review thereof.

I'm not the sort to leave things be. I'm too laid-back to be a perfectionist, but I expect I'll always be revising these reviews, fixing grammatical errors, re-evaluating old opinions and adding in a new favourite swear word or two here and there. And, in the case of Child's Play 3, I'll be fucking horrified by what I find. "This reviewer is one hell of a troller," says one commenter, below. He's not wrong, although I was 21, so maybe cut me a little slack. I take umbrage with the word 'butthurt' too. Mostly because it's a stupid word, but also because I've never really given enough of a shit about the Child's Play franchise to get 'butthurt' about it. I'd venture so far as to say that the only 'butthurt' one is the one angry enough to call the reviewer 'butthurt' in the first place. Which, in turn, got me 'butthurt' enough to issue this rebutt(hurt)al. What the fuck does 'butthurt' even mean, anyway?


Ho, on to the review, and my re-evaluation therein. As with my revisited review of Halloween, only a few sentences of my original text remain. Certainly not that whole paragraph where I repeatedly referred to Justin Whalin as 'Jimmy fucking Olsen', or the bit where I called Chucky's plan 'retarded'. Christ, 21-year-old me was the sort of reviewer who used the word 'retarded' in his writing. I shudder. At least it's not 'shit feast' though. And I did manage to keep the animal ball-sucking references to a minimum.

Anyhow, in Child's Play 3, we find that little Andy Barclay has grown up to be Jimmy Olsen from Lois & Clark, the crap Superman TV series.  Obviously the director decided that he didn’t really care whether we root for poor Andy anymore (not that I ever did), because everyone hates that particular Jimmy Olsen. As such, the biggest problem with Child’s Play 3 is that there aren’t enough scenes with Chucky beating up Jimmy Olsen. Bouncing from foster home to foster home, Andy has been transferred to military school, where they hope to iron out his doll-traumatised tendencies. Apparently he’s become a tearaway now, but it’s hard to buy Jimmy Olsen as anything other than a whiny brat, traumatised by a ginger doll. 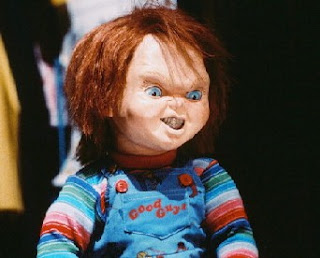 Despite a military academy being an awful place for a tiny serial killer to hide, Chucky sets about trying to steal the body of Tyler, another child they just happen to have hanging around the school. And so Chucky kills a few insignificant bit players before trying to carry out his stupid plan and kill Andy, while he's at it. To be fair, Jimmy Olsen does have a face that tends to invite being murdered.

Repetitive and predictable, Child's Play 3 isn't a great sequel. Its setting is uninspired, the story a little dull. However, it does have the Cardassian chap from Deep Space Nine in it, playing a sadistic barber (really) who appears to have nothing better to do than shave children's dolls (also really). Dourif's voice work is as skeezy as ever, and the Chucky animatronics are pretty great, in a creepy, dodgy kind of way. My original review was a lot longer here, with me whining about the child actors (no change there then) and making far more references to Chucky's hair colour than was at all necessary. 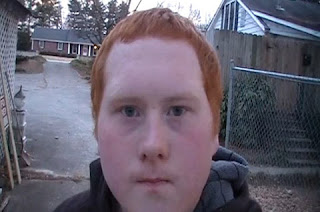 Gingers do have souls, and Chucky wants to put his in your body.

Ultimately, and despite any whining otherwise, Child's Play 3 is far from the worst instalment of the series. We have Seed of Chucky to thank for that, which is about as enjoyable as, uh, fuck it, I can’t think of anything even nearly as agonising as watching Seed. Except for reading my old reviews.