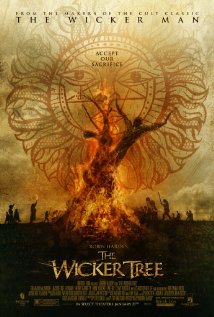 
A spiritual sequel to The Wicker Man. It certainly feels very in keeping with a Wicker Man film, but perhaps not the one Robin Hardy had in mind. I would not have been surprised to see Nicolas Cage running around this movie in a bear suit, punching women in the face.


Based on Hardy's own novel, Cowboys for Christ (how much better is that for a title?) The Wicker Tree sees a wholesome Texan gospel singer (Nicol) and her boyfriend Steve (Garrett) travel to bonny Scotland in order to convert the heathens they find there. Scotland is a cheerier place than Frankie Boyle would have you believe; full of smiley pagans, cheeky wee sexpots and cheerful murderers. Beth is chosen to play Queen at the village's annual big hippy festival - but we all know how that turned out for Sergeant Howie and Sheriff Malus, don't we? NOT THE BEES.

I hadn't thought it possible, but The Wicker Tree is every bit as tonally useless and inconsistent as Neil LaBute's infamous misfire. Everything about it plays like a comedy; and not even a black one. Cowboys and villagers alike give broad, buffoonish performances that make Nicolas Cage's look calm and considered in comparison. HOW'D IT GET BURNED.

This isn't helped by a bizarre streak which has Beth seeing the ghost of her slutty pre-Christian self slutting about in her hotel room, and some inappropriate physical comedy from the creepy butler. The reference will be lost on anyone outside of the UK above (or below) a certain age, but there's even an appearance from Trent from off've My Parents are Aliens. I actually enjoyed this more than I did Christopher Lee's cameo, because My Parents are Aliens is probably my favourite kids' television programme ever (because Batman cartoons obviously don't count as kids' TV). Maybe if Lee had played a bigger role, as planned, The Wicker Tree would seem less daft, but it's doubtful.

Against all odds, the ending is interesting and actually approaches the original Wicker Man in its cruelty. Sadly it's accompanied by the same stunning stupidity as the rest of the movie and just seems as funny as Nicolas Cage with a bee-box on his head. I enjoyed The Wicker Tree, but for all the wrong reasons.

Email ThisBlogThis!Share to TwitterShare to FacebookShare to Pinterest
Labels: So bad it's good