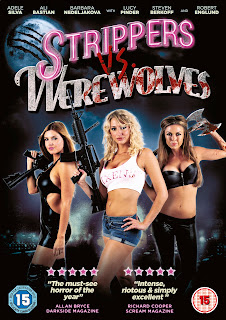 Martin Kemp is a werewolf and attacks stripper Adele Silva from off've Emmerdale, who proceeds to kill him with a silver pen. But werewolf Martin Kemp has some seriously dangerous buddies, and soon his gangster werewolf mates (led by Billy Murray, who will apparently do anything from Eastenders to vampire films to insurance adverts for a few quid) are out for revenge. I'll probably get my penis for rescinded for saying this, but Strippers vs Werewolves is remarkably not-sexy. What can I say, good acting is hot.

Adele Silva (famous for Emmerdale and going to Hollywood - and finding herself working in a shop* there) is borderline unwatchable, pouting like an even worse Kristen Stewart and giving the same whispery line delivery for everything. Amongst the actresses, there's not a single good performance. Which is what happens when you let the readers of Nuts Magazine dictate your cast. Lucy Pinder, really? The blokes fare slightly better, with Martin Compston handling most of the real acting stuff. Billy Murray does exactly the same thing as he does in everything, but it works okay here. The more jokey tone makes it easier to handle here than it is in serious stuff like Dead Cert (essentially the same film but worse), Eastenders and those stupid insurance adverts he was in. His pairing with Robert Englund feels oddly right, even if they do just stand and growl at one another for five minutes. Englund's cameo is fun, although given the quality of the film, maybe this American Werewolf should have stayed out of London.

Strippers vs Werewolves is watchable - and even funny in places - but not once was I under the impression that it's anything but a fluffy hunk of shit. With the death of Martin Kemp went my hopes. Strippers vs Werwolves is the sort of movie in which the characters' names pop up next to them as they appear in the film. The makeup effects are sort of original (the 'wolves remain humanoid, save for sideburns, beards and teeth) but look terrible beyond that novelty. The script is annoying (it's just people repeatedly saying "naughty this," "naughty that") and the music is awful. The final fight is completely devoid of wit, tension or action. It offers neither of the things promised in the title: the strippers never strip and the werewolves neither look nor act like werewolves. It's a spiritual sequel to Lesbian Vampire Killers.

*The only proper links I could find were to The Daily Mail and The Sun. Fuck off if you think I'm linking to that.