From Dusk Till Dawn 3: The Hangman's Daughter 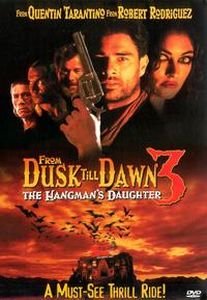 The Dusk Till Dawn franchise returns to The Titty Twister bar, its own roots and early 1900s' Mexico for a respectable outing that's less disappointing than Texas Blood Money but still not quite as good as the original piece. It's cowboys versus vampires with Danny Trejo and a stupid snake thing.


Where I went into Texas Blood Money with unrealistically high expectations, I switched onto The Hangman's Daughter with stupidly low ones. After a set up that takes way too long (I was beginning to question whether there would ever be any vampires in the film) this threequel quickly becomes a lot of fun. Michael Parks plays an alcoholic atheist and uses the phrase "flatulating explosions". There's a bit where a vampire sucks off a horse. Drinks its blood, I mean. The ensuing action is fast paced, gory and ridiculous. The special effects are good too, although vampire Danny Trejo looks completely different in this to what he did in the original film and Texas Blood Money. Amongst the humans, there's no-one to quite match up to George Clooney or Robert Patrick, but Michael Parks is good in the relatively short screentime he gets. Its lead hardman bandito, Johnny Madrid (Leonardi) is boring and uncharismatic by comparison.

Again, the story follows a band of criminals escaped and on the run from the law. They kidnap the titular hangman's daughter and ride off into the sunset, where the Titty Twister awaits. The decor has changed, but it's obviously the Twister - Danny Trejo is working the bar. I get bored after half an hour at work; Danny Trejo has stacked up over 100 years working at the same bar. Talk about job satisfaction. Vampires, naturally, ensue in the mother of all bar brawls. But what did you expect from a pub with Danny Trejo behind the bar? Following Texas Blood Money, the Titty Twister has since been renovated into a Wetherspoon's. It's only marginally worse than before.

The dalliance back to the (very) early 20th Century makes it feel like more than just a rehash of the original (although it is). The Hangman's Daughter is a fun, funny prequel with enough originality and wit to not besmirch the original piece's name. Coming straight to DVD all the way from 1999, it's ironic cowboys vs vampires before ironic mashups were really a thing.