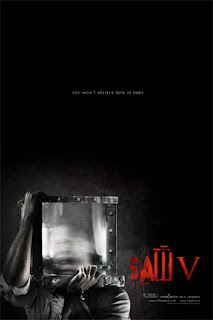 Director: David Hackl (2008)
Starring: Tobin Bell, Costas Mandylor, Scott Patterson
Find it online: IMDB, Amazon UK, Amazon US
In a resounding "shit off" to your Saw boxset, Jigsaw's back for a fifth outing. It's ironic really. Fella gets more screentime in death than he did during his prime in the first movie (lying pretend-dead on a toilet floor not withstanding). Because the series creators seem to regard Jigsaw as an interesting character worthy of screentime, Tobin Bell's killer is crowbarred into a bunch of flashbacks and nonsensical bits which supposedly happened over the course of the first few movies. Only this time I care even less. Yes, less than this.
The whole thing trundles along in its usual way, towards a predictable climax (come on, there was no way Hoffman would ever be caught. Strahm was always destined to die the same death of all Saw heroes) intercut with various tortures and false promises of some sort of meaning. Not even the normally quite likeable Julie Benz can elevate this episode. She plays a boring, uninteresting and unlikeable businesswoman type, trapped in an underground dungeon type thing with a host of other disparate, boring, uninteresting and unlikeable people. Their big game plays out like a team building exercise, with the resounding moral message being that teamwork overcomes all. Meanwhile, Strahm was fucked from the start. His final test is unwinnable really, as the franchise needs its heroes to keep dying in order to keep going. It's very lazy and very predictable. Just for once, the twist should be a Happy Ending for all; Jigsaw and his cronies left dead and run out of silly games.
"You won't believe how it ends". My dear Saw, I couldn't give a fuck.