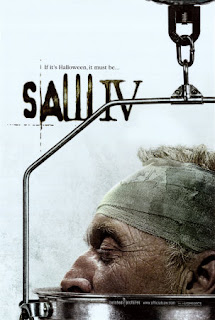 Director: Darren Lynn Bousman (2007)
Starring: Tobin Bell, Costas Mandylor, Scott Patterson
Find it online: IMDB, Amazon UK, Amazon US
Destroying any hope that Saw IV might resurrect Jigsaw as a zombie, Jesus or Frankenstein, the movie opens with everyone's favourite grumpy cancer patient lying dead on a table. A pointless autopsy scene ensues, apparently only present in order to outdo the previous movie's brain surgery bit. A mini tape cassette is found in his stomach. Jigsaw wants to play some more games. Well, at least he's persistent. His addictive personality is the least of his problems now though, being dead and all.

The tape is handed over to Detective Hoffman (Mandaylor). Thanks to The Girl Who Loves Horror for reminding me of his name. Considering he's supposed to be the series' villain now, he's one forgettable motherfucker. Not only that, but I have trouble telling him apart from supposed hero Detective Strahm (Patterson) so it's little wonder that I get these last three instalments all mixed up. It doesn't help that neither man has a jot of charisma to share between them. Saw IV brings us the most boring and bland gathering of protagonists and antagonists since almost ever. Gone are the bits of fun casting like Ben from off've LOST, Danny Glover or that other bloke from off've LOST.

But at least Donnie Wahlberg is back! He has hardly anything to do in his limited screentime, but for me his presence is the only worthwhile thing about Saw IV. When your movie's watchability is saved by Donnie Wahlberg, well, that's when you know you're doing something wrong. Alas, his re-introduction is rendered ultimately pointless since he gets his head smashed in with an ice cube not too long afterwards. The Saw franchise thus far reads like a giant "fuck you" to Donnie Wahlberg. Way to waste your series' best character, Saw people (yes, Whalberg's Detective is actually and unironically my favourite character). Whilst all this happens, one of the remaining cops from Wahlberg's squad is playing a game of his own. This translates into failing to save anyone from dying and then getting himself killed at the end.

There's a twist, which seems complicated but actually isn't. I suppose it's clever in its own not-clever sort of way, with the timelines and stuff, and also Hoffman is revealed to be Jigsaw's apprentice, fuelling a further bunch of instalments. Next up: Strahm is on Hoffman's tail, Julie Benz plays another stupid game and there's a flashback to Jigsaw bitching. Again.