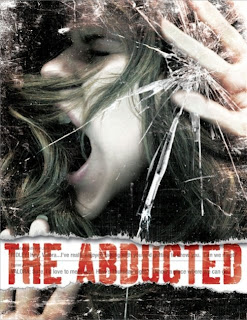 Ridley meets girls online. Then he kidnaps and murders them, like the unimaginitive cliche he so obviously is. Beginning to question your match.com membership yet? You bloody should be: The Abducted plays out exactly like an after-school special on the perils of meeting people online. The tagline? ‘Before you date online – think again.’

The thing opens with a lot of cut-and-pasted heavy metal rock, and a dude being shot in the back of the head. Mere moments later, we meet our heroine, Valora; already at Ridley’s mercy. After they swap truly horrible expositional dialogue and naff threats (“you go and do anything stupid, and I’ll take this girl out faster than you can say match dot dead"* or “if this were a hurricane, you’d be the one getting taken”), Ridley chains Valora up and leaves her to wander around his junkyard back garden for a while (like many STD villains, Ridley lives in a trailer). All of this is interspersed with him never shutting the fuck up. 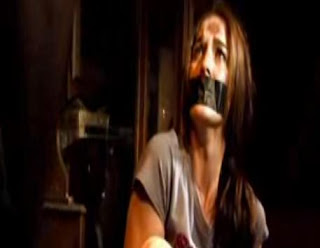 As Valora remains Ridley's captive, the viewer is forced to endure the worst excesses of STD horror. It’s slow, boring and stupid; a dull piece of trash that’s even less interesting than the Coronation Street handling of the same subject. As Ridley begins to fall in love with his captive, we are treated to a bunch of pointless flashbacks to Valora’s childhood.

The whole thing, then, is a bit like a modern day remake of The Collector as helmed by a Rob Zombie wannabe. The Abducted is highly predictable and far too slow to sustain the viewer’s interest. The script is unintentionally hilarious; featuring such zingers as “can you dig it?” (as Ridley enters the trailer carrying a shovel), and the action isn’t much better. A key scene has Ridley beat Valora unconscious with a bright yellow watering can. Done right, it could have come across as darkly funny, but The Abducted plays it straight, and falls flat as a result. Likewise, in a later scene, she fantasises about pulling Ridley’s eye out with a fork… and director Jon Bonnell fucks it up worse than he did the script.

Playing Ridley, James Ray is undoubtedly the movie’s worst ‘actor’. Looking like a budget Eric Bana in Chopper, he speaks with a Texan drawl and is constantly babbling nonsense throughout. Serial killers aren’t supposed to be particularly likeable, but Ridley misses the ‘scary’ mark completely and ends up slap-bang in ‘fucking annoying’ territory.

As Valora, Kathleen Benner isn’t quite as unbearable, despite her inability to appear, in any way at all scared by her situation. She does a quite convincing Bill Murray impression throughout, seeming unimpressed by yet distant from Ridley’s various tortures. Shit, spending ten minutes in the annoying cumfunt’s company would have me begging for mercy; let alone two shitting days. They’re well suited to one another, really, since she’s an irritating tit too.

This is one film where 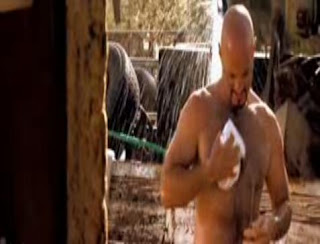 a little torture guff would have benefited; since both characters are so unlikeable, it’d be rather nice to see them strapped to tables and cut the fuck open. As such, the nearest we get to any action here is a bit of mud wrestling. And not even the fun kind of mud wrestling, dagnammit.

In place of a denouement proper, we find Ridley showering as a Sheriff gets the drop on him. Conveniently enough, said Sheriff has a heart attack just as he’s about to shoot Ridley. The final fifteen minutes then consist of some fucking about with a sniper rifle, a shovel and a laptop.

In the end, despite its all-around uselessness, The Abducted stands as a damning condemnation of online dating. The scariest thing about The Abducted? That two people as fucking annoying as Valora and Ridley are out there, waiting behind their keyboards to talk just to you…

* GET IT. HE QUOTED THE NAME OF THE FILM. AND HAHA, MATCH DOT DEAD. THAT SOUNDS LIKE AN ACTUAL WEBSITE ONLY IT IZZUNT.