Freddy vs Jason vs Ash: Nightmare Warriors (1 of 6) 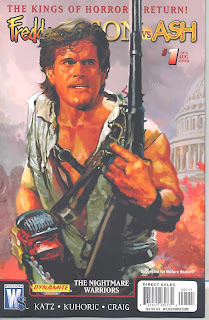 Picking up a month after Freddy vs Jason vs Ash left off, the first issue of Nightmare Warriors finds the Chosen One – that’s Evil Dead’s Ash to you – living happily in suburbia with the first book’s survivor. Jason Voorhees is buried at the bottom of a lake, whilst Freddy has presumably buggered back off to the dream world. A group of shady military types find the Necronomicon (which, it is revealed, mama Voorhees used to grant Jason eternal life) and steal it away. This, predictably enough, ends up bringing Jason back to life, whereupon he kills a diver and some soldiers. Once more, Freddy remains in the shadows for now – seemingly content to control Jason from the sid 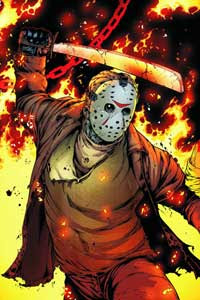 elines; encouraging the retarded mummy’s boy to hunt down and kill Ash. Apparently killing the chosen one will give Jason some superpowers or something.

This being but the first part of a six-issue miniseries, it’s hard to say how Nightmare Warriors will pan out. At a guess, I’d say that Freddy and Jason become a national threat of some sort, and the government will call on Ash to save the day (what with the Necronomicon being taken by military types & an attempt to recruit Ash into some sort of military scheme).

The original writing and illustration team are back… which doesn’t bode amazingly well for Nightmare Warriors’ future readability. The original FvJvA started off well, but by issue six, Craig’s artwork had become distractingly shoddy; often seeming rushed and half-finished. Likewise, Kuhoric’s script ran out of ideas after the second issue, with the story descending into something of an unintelligible mess (with an unforgivable Watchmen rip-off being perhaps the lowest of all low points). And, unfortunately, the first issue of Nightmare Warriors is disappointingly… samey.

With all that said, however, Nightmare Warriors is pleasingly gruesome and comical. In this age of remakes, it’s nice to see Freddy, Jason and Ash in their original incarnations once more, and hell… the concept is still a spunk-inducing dream for fanboy bitches like myself.
Expect the following issues to be reviewed in due course.

Email ThisBlogThis!Share to TwitterShare to FacebookShare to Pinterest
Labels: A Nightmare on Elm St, Comic books, Friday the 13th