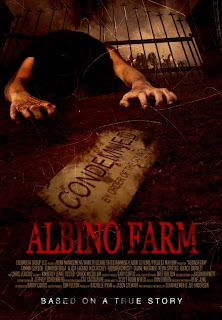 Well no, an ‘Albino Farm’ probably isn’t exactly what you think it is, but the film’s pretty damn entertaining anyway. Unless you’ve ever seen a backwoods horror film in your life before; in which case you’ll be able to predict what happens half an hour before it actually does.

The plot? Four college chums doing some research for a school project find themselves lost in the Ozark territory of dodgy backwoods America. Whereupon, obviously, they are beset by a tribe of deformed Wrong Turn rejects… one of whom just so happens to be Chris Jericho from off’ve wrestling.

After one of the idio 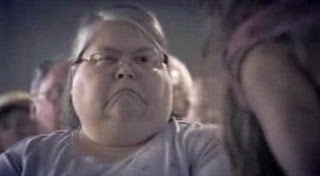 ts decides to leave the spare tyre at home (in place of beer), their SUV breaks down and they end up travelling to a nearby house to buy tyres from the owner. Shit, at least it’s not a gas station. And, because they all deserve to die (apart from the bookmarked Final Girl - Tammin Sursok offa’ Home & Away) they immediately start taking the piss out of the blind owner. He responds by telling them they’re all gonna die. “What you oughtta do is turn around and go home.” But I digress, what’d a backwoods horror be without a doom-predicting local? (Original, perhaps).

So far so Texas Chainsaw Massacre/Hills Have Eyes/House of 1000 Corpses/Wrong Turn/Manhunt/Backwoods. After finding an enormous pile of tyres in the old geezer’s back yard, the kids head off on their way. As night falls, they come across a great big tent and decide to investigate. Tammin Sursok surmises that the locals are having a party (y’know, like in 2001 Maniacs) which the gang’s Chris Evans-lookalike decides to crash; easily t 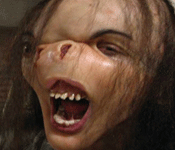 he most irritating of the characters, you’ll hope that he dies soon. Unfortunately, he doesn’t. “I see this as an opportunity to dink heavily and make fun of some hicks.” The fella’s the entire reason why people hate college students and American kids.

You’d think that this would be the beginning of some actual story, but no. Albino Farm takes an exceptionally long time to draw out what little narrative there is. Much of the first twenty minutes could have been condensed into a single scene. The bit with the tent comes to nothing, and is followed by another pointless bit in a café, followed in turn by some pointless wandering around darkened streets and a church. And then, finally, the boneheads are led to the titular Albino Farm. At this point, the script has the cheek to say: “I know how this is gonna play out.” So the fuck do I, and so will anyone else who’s ever seen a movie in their entire life.
Albino Farm cleverly distracts from its lack of originality by drenching everything in darkness so you can’t tell what’s happening. There’s probably a bear trap scene in there somewhere, and a whole lot of wandering around with torches screaming haplessly.

The whole thing is accompanied with a highly xenophobic streak which sees the characters relentlessly bully and insult anyone who looks different to them. No wonder Southern American movie folks are so angry; Albino F 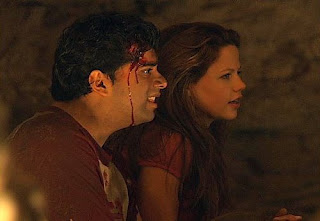 arm regards them with disgust and probably advocates locking the disfigured and disabled in a cage anyway.

Needless to say, the acting is awful. The script is slightly better than you’d expect, and the villains of the piece do look pretty good. The scare scenes are of a higher quality than, say, Backwoods, whilst there are one or two decent bits scattered amongst the cliché (the lap dancing mutant). With better written characters, decent actors, and a higher budget, Albino Farm could probably have been on a par with Wrong Turn or Timber Falls.

As it stands, Albino Farm is, ultimately, a predictable backwoods hack-em-up that somehow accidentally ends up being entertaining despite (or perhaps because of) its lack of originality. It’s a hard film to recommend, but also difficult to completely condemn. If you’ve ever thought that The Texas Chainsaw Massacre could use a wrestler or two, then Albino Farm is the film for you.