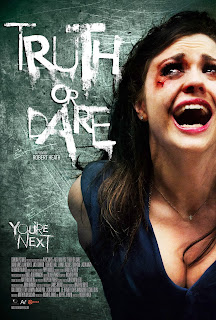 The reason I don't play Truth or Dare. Or go to parties. Or have friends. In Truth or Dare, a gang of friends play a game of terrible truth or dare. Tied to chairs and bullied to death, all in the name of vengeance, it may just be the worst game of their lives. See, you don't get this shit playing Scrabble. At least, not unless you're taking it really seriously, in which case you should probably chill out a bit.

Led into the woods to attend the birthday party of a chap nobody really liked, the protagonists of Truth or Dare bring everything they get upon themselves. The villain of the piece isn't much better - a homophobic posh army veteran (think James Blunt, except not quite as beautiful) - so we're left with very few people to sympathise with. As secrets are revealed and truths are unsheathed, that list of the not-as-loathsome becomes smaller and smaller. One person, to be exact: the lovely and fairly decent Florence Hall. Well, it's impossible to hate someone called Florence. My nan's name is Florence, so there, I have proof.

Better Florence than her horrible ex-boyfriend, Chris (Gordon), the guy responsible for setting a whole chain of events into motion. He does have an impressive David Hess style perm though, so at least he has his redeeming feature. Much like the film has a few of its own. For all the annoying characters, bad acting (none of the kids can do villainous for shit) and Saw type torture bollocks, it does offer a few surprises by the time the denouement rolls about. At least one of these I saw coming, but there are some nifty left-field shocks that might make the film worth your while. 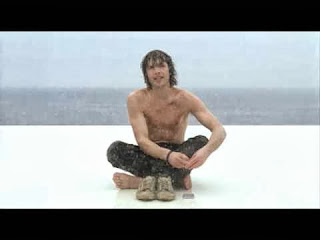