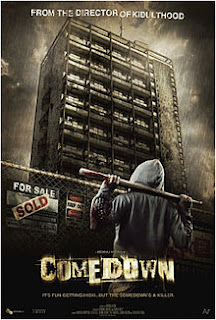 Badmans cotchin in a abandoned block of flats when a bludclart serial killer get up in dem grill and tax Lloyd's (Jacob Anderson) bitch. Badmans try to fight back and rescue Jemma, but that serial killer got mad skills. Bredren try to escape and even call the feds, but him got the place on lockdown. Not even main man Jason (Deacon) or hench Col (Duane Henry) really stand a chance against rasclart serial killer. Blud, it's bloody.


Comedown is like some mashup between chav drama Kidulthood and The Collector. Like Attack the Block, the script is well realistic, the characters believable innit. Nuff respect to Adam Deacon, whose character is a bit of a dickhead and a nutter, but a watchable one, innit. It reminded me of his character in the surprisingly watchable Anuvahood (innit, because using innit in a sentence is my attempt at sounding less posh, innit) in that Deacon ain't afraid of portraying no bell-end. With this, Anuvahood and Dead Set, Adam Deacon is on the way to becoming the definitive chav actor. Like I said, nuff said. Rather Deacon than Danny Dyer, any day.

While the basic concept may be similar to Attack the Block, it's less brainy than that shit, being content to cotch as a particularly nasty urban slasher movie. There's a sense occasionally, that Huda really hates his characters. But then, so do I. And so will you, probably. The villain in Comedown could have been some Daily Mail reading bumbaclot or Tory bastard without so much as skipping a beat, innit. The CGI toward the end is kinda whack, but otherwise, Comedown is surpisingly sick. It's the best DVD your benefits could possibly buy (unless you taxed it from Asda, you badman, you). Nuff respect must also go out to the real life chavs, who speak like this all the time. It's much harder than you'd give it credit for. Phew.