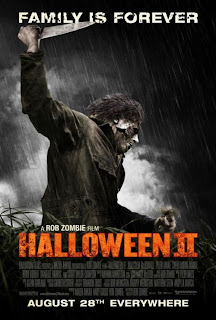 Revisiting Rob Zombie's Halloween, I was stunned to discover a newfound appreciation for this remake and its director, Mr. Robert Zombie. With his Halloween being much better than I remember it being, imagine my surprise when I found Halloween II to be much worse than I had remembered.


The action picks up immediately where the previous movie left off - Michael Myers is apparently dead, Laurie (Compton) understandably quite traumatised, and Loomis (McDowell) and Annie (Harris) are seriously injured from Michael's vicious attacks upon them. To the hospital, then, where Zombie proceeds to condense the events of the first Halloween II into the space of twenty minutes, sort of. It's a shame that it's all a dream sequence, then, because this is where Halloween II is at its best.

One year later, and Laurie is now living with Sheriff Brackett (Dourif) and fellow survivor Annie. Michael is presumed dead (his body missing in action after the meat wagon hits a cow in the road) and Doctor Loomis has become a media whore celebrity, selling his lurid Michael Myers murder book. Michael's not dead though, and as another Halloween rolls around, he decides to come home. Again. This spells disaster for poor Annie, who, for the second Halloween film in a row, is brutally stabbed full of holes by Mike while stark naked. It's Laurie's story, but Annie and Sheriff Brackett are the only characters you'll actually care about. Certainly more so than Loomis, who spends most of the film acting like an asshole and then being surprised when people call him out on it. It's a real waste of a good character and great actor, especially considering that his eventual redemption ultimately comes to nothing. Compton is good as Laurie, but, like Loomis, not given good enough material. The Bracketts are the only likeable characters in the movie. I found myself genuinely, surprisingly affected by their fates in this film. 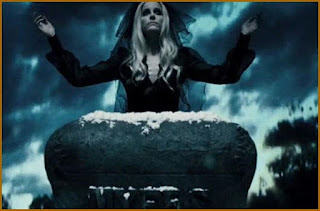 Meanwhile, Rob Zombie has a hot wife and he wants you to know it

Then there's Michael himself, transformed from a silent boogeyman into a bearded, furious (probably quite stinky) tramp. His physicality is still the most impressive thing about this Myers, who might just be the angriest psycho we've ever seen in a slasher movie. That's not always a good thing (his guttural screaming whenever he stabs or stomps a fool to death gets annoying fast) but it does make this iteration of Michael imposing, if not scary.

It's in Halloween II that we also see glimpses of the Rob Zombie who would go on to direct Lords of Salem. Some of the imagery is great. It's a shame that it doesn't actually gel with the film (Sheri Moon Zombie and her white horse never ceases to be ridiculous) since it's a really interesting direction for a sequel to take. Fair play to Zombie for not resting on his laurels and attempting to do something different with the story. It's awful, but a different kind of awful. Like Texas Chainsaw 3D awful.

Better this than kung-fu Busta Rhymes, or the original Laurie Strode being murdered in an embarrassing, insulting manner in the first twenty minutes. Halloween II may have killed off the franchise again, but at least it did so with style.