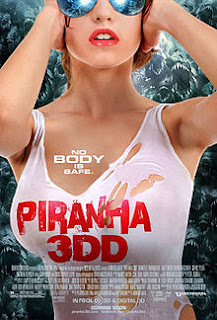 Geddit, boobs. Alexandrea Aja's Piranha remake seemed to come out of nowhere and instantly became one of my favourite movies of 2010. Given its success, a sequel was inevitable. That sequel comes in the form of Piranha 3DD. The title is a good indicator of the film's level of maturity. Haha, boobies.

It's more of a broad comedy than its slick, gory predecessor. With Alexandre Aja not returning, Feast director John Gulager takes over as head honcho. As with Aja's abandoning The Hills Have Eyes sequel, his influence feels sorely lost here. It's not as taut as Aja's Piranha; the scale of the action smaller and less impressive. Maddy (Panabaker) returns to her small American hometown after going away to study fish at University. The water park she co-owns with stepfather Chet (Koechner) is undergoing a big renovation. Chet is turning 'The Big Wet' into an adult water park, in which boobs are the order of the day. But in siphoning the water from an underground lakes, Chet is just asking for trouble. And piranhas.


And yet, piranha teeth are only the second most set of impressive gnashers in this Piranha movie. As its predecessor did with grumpy Richard Dreyfuss, the film opens with a celebrity cameo from one Gary Busey and a farting cow. He's just one of a stream of cameos that makes Piranha 3DD so much fun to sit through. Christopher Lloyd reprises his role from the original, as does a decidedly shorter Ving Rhames. Best of all though, is the film's secret weapon - David Hasselhoff, gamely playing himself as the water park's celebrity lifeguard. I left the cinema with the Baywatch theme tune stuck in my head. And yes, he does do the running-in-slow-motion thing. "Welcome to rock bottom," the Hoff says, as he first enters The Big Wet. Hardly. If anything, it's a career highlight. The script is deliriously filthy, but it's Hoff's delivery of "little ginger moron" that emerges triumphant (certainly more so than the predictable and over-repeated "Josh cut off his penis because something came out of my vagina").

It's a sleazy, low-rent sequel to something that was already pretty sleazy and low-rent. The nudity is made more blatant than before (oh, but all those three dimensional diddies) and the action is scaled back and more personal. A Nightmare On Elm Street/Slither bathtub scene is predictable, but most of it works well. The 3D is suited to the material and fairly unobtrusive, because if I am gonna spend money on stupid 3D glasses, it had better show me interesting things, like vomit and bosoms and gore.


Piranha 3DD delivers the best mid-credits scene of the year. Balls to Thanos, his moment of glory outshone by David Hasselhoff in a 3D booby movie.