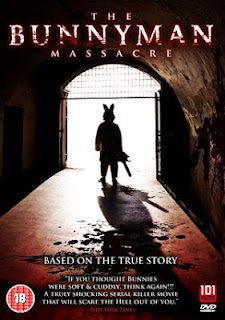 
If I whined at The Bunny Game for being too arty and pretentious (and I did, quite extensively) then The Bunnyman Massacre has the opposite problem - it's completely artless. Artless like me linking two completely unrelated movies together simply because they both have 'bunny' in the title. There's a reason it has the word 'massacre' in the title and a picture of a chainsaw on the poster though - The Bunnyman Massacre is an uncredited remake of The Texas Chain Saw Massacre with a man in a bunny costume and no headcheese. It is brainless.


Dim teenagers drive out to the woods where they are menaced, first by an aggressive truck driver and then by a lunatic dressed in a bunny costume and wielding a chainsaw. I very much wanted to like The Bunnyman Massacre, since it utilises two of my favourite things: a madman dressed in a comically inappropriate costume, and chainsaws. But this is ruined by the fact that it also utilises one of my least favourite things: horrible filmmaking.

There's a scene in which the youths beg for help from a woodland hillbilly who stands and shouts abuse at them like he's the Frenchman in Monty Python and the Holy Grail. The rest of the characters are the sort of relatives that even Leatherface wouldn't bunk with. They make the Firefly family look positively aspirational. There's the requisite hot daughter (who winds up being the most psychopathic of all), the deformed childlike idiot and the scary one who carries the chainsaw (in this case, Bunnyman). There's a scene in which  Bunnyman tortures a poor innocent soul whilst listening to classical music, then a bit in which the heroine is held captive, bound and gagged in the villains' lair.