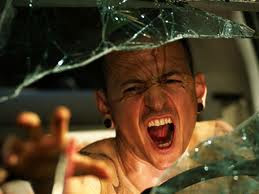 (Spoiler: silly racist car death is not one of those things)

Saw: The Final Chapter is out on DVD next month. As I re-watched the movie in preparation, I realised that The Review Hole has been quite critical of the franchise over the years. To celebrate its (supposed) end, I proudly present a list for your consideration: Things I Hate Least Don't Hate Like About The Saw Franchise. Some spoilers abounds.
10. The First Three Movies. Otherwise known as the only good Saw movies. The first movie is very good (if Se7en-lite) and the sequel, I actually slightly prefer sometimes. The third stinks a bit, but it feels like a proper arc for the characters involved. If only they'd stopped there. 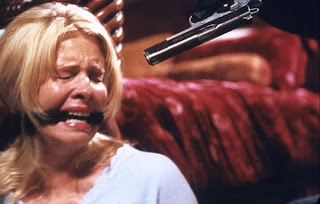 8. Hoffman's killing spree. It says a lot for my feelings about Saw's torture guff overreliance that my favourite bit of The Final Chapter was when the torture stopped and crazy Hoffman went slasher movie mode. The final act in the police station is ridiculous but eminently watchable. Black leather gloves? How very Giallo. The most interesting thing Hoffman ever did.

7. The videogame. Haven't played the sequel yet, but Saw: The Videogame wasn't half as bad as I'd expected it to be. You play as Detective Tapp, trapped in an old lunatic asylum and forced to play Jigsaw's games. It's repetetive, overlong and occasionally monotonous, but worth a single playthrough at least.
6. Hoffman's Arrowmobile. That this ended up as nothing more than a dream sequence was one of The Final Chapter's biggest disappointments.
5. The Needle Pit. Actually one of the few traps to make me cringe. Sometimes the low-key traps work a lot better than the overblown stuff (The Final Chapter's Thunderbird incinerator? Really?)
4. Donnie Wahlberg. Yes, and I'm not joking either. Donnie Wahlberg's detective in Saw II is one of my favourite characters in the franchise. That he died in part IV caused great consternation in the Joel H house. Even if his death was one of the best moments in the franchise's history: 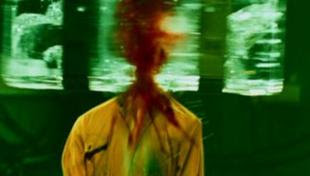 2. Pighead. Because I'm a sucker for slasher icons and people wearing pig head masks. And because the battle between yourself and Pighead in The Videogame is fairly awesome.
1. Danny Glover. I'll be honest. The other 9 bullet points in this list could have been Danny Glover, since I do heart me some Danny Glover. Even in those Orange cinema adverts and especially in Predator 2. Plus, he reportedly thinks Saw is stupid too. 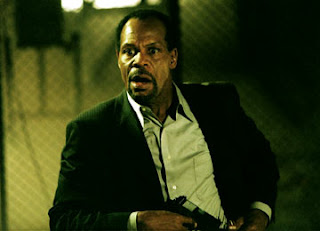 Not too old for this shit? Read the Saw retrospective.