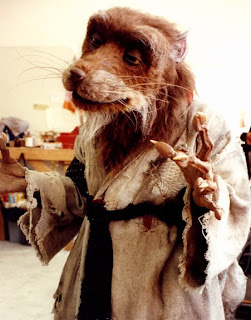 No, numpty. Not that one.

Director: Toby Wilkins (2008)
Starring: Charles Baker, Jill Wagner
Find it online: IMDB, Amazon UK, Amazon US
A vacationing couple find their camping weekend totally fucked up when they break the tent. (No joke and on an unrelated note: I work in a shop that sells tents. I seem to spend an eternity serving idiots like those in Splinter. The pole they were using was obviously the wrong one. That's what happens when you buy tents from Argos. Tttccchhhhh). Anyway, their tent broken, idiot couple decide to drive to the nearest motel. Only they find themselves carjacked by a loopy druggie and her shouty, sweary boyfriend. Stopping off for some gas and munchies (what would a hostage situation be without M&Ms?) they're suddenly attacked by a zombie-like creature, covered with splinters and in a very messy-looking state. What follows is a bit like The Thing, only set in a gas station and with no Kurt Russell.
Splinter is body-invasion horror with a bit of zombie thrown in. The villain of the piece is an unidentified infection; passed on from host to host via a prick of the skin, caused by the needles and spikes which emerge from the hosts' bodies upon infection. Despite the movie's relatively tight budget, it looks damn good and jolly gruesome. Splinter boasts a multitude of body parts being chopped off, people being ripped in half and lots of messy splatter. There's even a couple of Evil Dead 2 type scenes in which disembodied hands charge around attacking their owner(s). It's lovely, old-school stuff. And, best of all: no-one gets tortured.
You've probably seen much of it before, but Splinter does it with enough verve, gore and tenacity to make the story fun and interesting. That said, the ending is a bit of a letdown. The action is still plenty amped up, but it's a pretty bog-standard ending that could've used perhaps a bit more one-on-one fighting between the heroes and the nasties. Still, it's always nice to see a new horror movie with a properly horrible nasty at its fore. More of this sort of thing, please.